Biden also said the city’s murder rate has “tripled.” The city says there were a record-high 66 murders last year — double, not triple, the 32 murders that occurred in 2008.

The vice president has been touring the country delivering his pitch for the American Jobs Act, President Barack Obama’s $447 billion plan that includes $35 billion to prevent the layoff of police, firefighters and teachers. On Oct. 12, Biden visited Flint, Mich., which has had the highest violent crime rate in the nation for the last two years. The city’s violent crime rate has increased from 20.2 violent crimes per 1,000 residents in 2008 to 22.1 in 2010, a jump of about 9 percent, our analysis of FBI reports shows.

Crime is bad in Flint, no doubt, but Biden makes it out to be worse than it is.

Biden, Oct. 12: You know Pat Moynihan said everyone’s entitled to their own opinion, but they’re not entitled to their own facts. Let’s look at the facts. In 2008, when Flint had 265 sworn officers on the police force, there were 35 murders and 91 rapes in this city. In 2010, when Flint had only 144 police officers, the murder rate climbed to 65 and rapes — just to pick two categories — climbed to 229.

He has cited Flint’s crime stats in other appearances since then, including at an Oct. 18 visit to the University of Pennsylvania — the home of FactCheck.org.

Biden, Oct. 18: I was up in Flint, Michigan, last week. Their police department’s cut more than in half. The murder rate, close to triple. The number of rapes have quadrupled.

A day later, Biden was asked by a reporter for Human Events, a conservative website, if he regretted “using a rape reference to describe Senate opposition” to the bill. Conservatives, including Rush Limbaugh, have criticized the vice president for suggesting that rape and murder will rise if the Republicans don’t pass the jobs bill. Biden replied: “I said rape was up three times in Flint. Those are the numbers. Go look at the numbers.”

We asked the vice president’s office to explain such a gross discrepancy. It referred us to the Flint mayor’s office — saying the figures came from the city. In response to our questions, Flint Public Safety Director Chief Alvern Lock put out a statement saying the city “stands behind the crime statistics provided to the Office of The Vice President.” It also said: “The discrepancies with the FBI and other sources reveal the differences in how crimes can be counted and categorized, based on different criteria.”

The statement falls short of supporting Biden’s various claims, however. For several reasons:

Update, Oct. 21: City spokeswoman Dawn Jones later explained to us that the 2010 figure provided to Biden included not just rapes that the city reports to the FBI but also “all cases of criminal sexual conduct.” That means the city and Biden were comparing reported rapes in 2008 (103) with all acts of criminal sexual conduct (229), including rape. That’s an apples-to-oranges comparison. And in any case those numbers don’t  support Biden’s other inaccurate claims — that rape has tripled and quadrupled. Jones did not readily have the figure for criminal sexual conduct cases in 2008 and answers to other outstanding questions, but she promised to get back to us and we will update this item more fully when she does.

Update, Oct. 23: We have now found that rape figures reported by Flint to the Michigan State Police confirm rapes declined in the city from 2008 to 2010. We also found that the broader category of “criminal sexual contact” (CSC) was also down. State Police figures show a 10 percent reduction in total CSC reports between 2008 (242) and 2010 (217). Also, murder, rape and robbery are declining this year in spite of police layoffs in Flint, Mich., according to the most recent official report released by the State Police. For more information, please read our Wire item, “Biden’s Flint Fiasco, Continued.”

Now, what about the number of murders in Flint? There is conflicting data on this point, too, but we accept the city’s account that there were 66 murders last year.

The 2010 FBI crime report shows that there were 53 murders in Flint. However, the city statement says that there was an “internal clerical error” in reporting the data to the FBI and that there were actually 66 murders last year. That’s consistent with what has been reported by the local media months before Biden’s visit. On May 23, the day the FBI report came out, the Flint Journal wrote that city officials said there were 65 murders, not 53. A few days later, the Flint Journal wrote that there were 66 murders — a figure others have used as well. It’s clear that the city made an immediate effort to correct the record on murders, something it did not do on rapes. 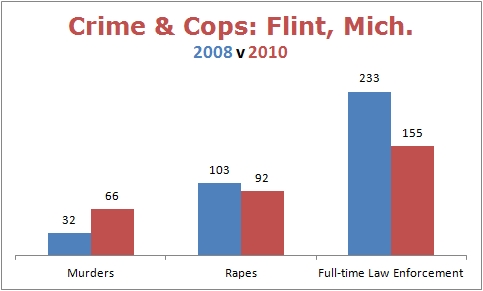 As for the city’s police force, it’s difficult to assess whether Biden was right. The FBI says Flint had 233 full-time law enforcement employees in 2008 and 155 in 2010, a decline of 78 employees or 33 percent. That’s a significant decline, for sure. Biden’s figures, however, show an even greater drop. In Flint, Biden said the number of “sworn officers” declined from 265 to 144, a drop of 46 percent.

Who’s right? We don’t know. We asked the city to provide information about police staffing, too, but the statement issued by the city didn’t address our questions about staffing. It’s possible, for example, that Biden included part-time employees. The FBI provides numbers only for “full-time law enforcement employees,” which it defines as “individuals who ordinarily carry a firearm and a badge, have full arrest powers” and are paid from government funds dedicated for law enforcement.

We should also note that in Philadelphia, Biden said Flint’s police department was “cut more than in half.” He may have been referring to current staffing. In Flint, Biden said the number of sworn officers is now 125 — which would represent a cut of more than half compared with Biden’s 2008 figure (265), but not the FBI’s (233).

Biden is right on his larger point: Police staffing has sharply declined, and the number of murders has sharply increased. But the vice president is clearly wrong when he says the number of rapes have “quadrupled,” when in fact they have gone down, or that the murder rate has tripled, when it has doubled.

If he’s going to quote the former New York Sen. Daniel Patrick Moynihan — a quotation we used when launching this site in 2003 — then he should get his facts straight to support his opinion.