The president made his remarks at a Shell plant in Monaca, Pennsylvania, that when completed will produce polyethylene pellets used to make plastic products. The president spoke on a number of economic issues, including at one point trade with Japan.

Trump, Aug. 13: I told Prime Minister [Shinzō] Abe — great guy. I said, “Listen, we have a massive deficit with Japan.” They send thousands and thousands — millions — of cars. We send them wheat. Wheat. That’s not a good deal. And they don’t even want our wheat. They do it because they want us to at least feel that we’re okay. You know, they do it to make us feel good. But the deficit is massive, which — changing rapidly.

The deficit with Japan is not “changing rapidly.”

The deficit in goods and services with Japan is up slightly under Trump. It was $56.53 billion in 2016, before he took office, and it was $57.98 billion in 2018, according to the Bureau of Economic Analysis (see Table 3 for annual and quarterly trade balance data, dating to 1999). That’s an increase of 2.6% in two years, so it has hardly changed at all. 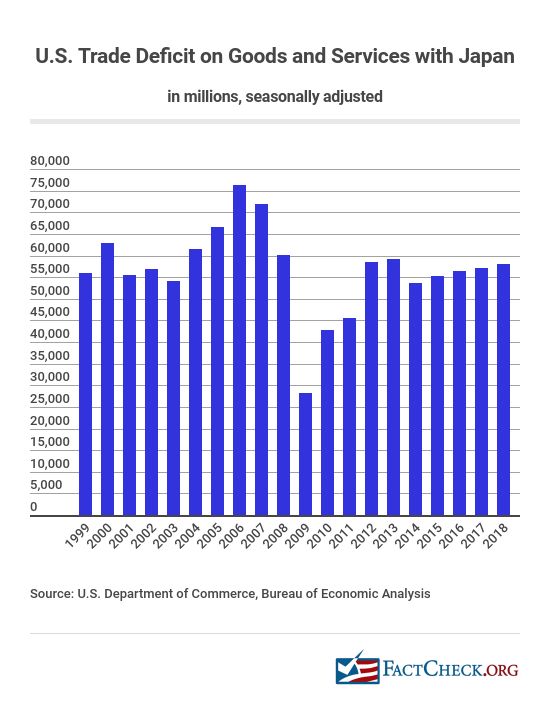 Although Trump describes the trade deficit as “massive,” the $58 billion deficit with Japan last year was smaller than trade deficits with China ($381 billion), Mexico ($79 billion) and Germany ($67 billion).

Trump specifically mentioned autos, and he is right that Japan sends the U.S. “thousands and thousands — millions — of cars.” Since 2014, the U.S. has imported more than 8 million new passenger vehicles and light trucks from Japan, but exported fewer than 100,000 such vehicles to Japan during that time, according to the Department of Commerce’s International Trade Association.

As with the total trade deficit with Japan, the vehicle trade imbalance has slightly increased under Trump.

The value of new passenger vehicles and light trucks the U.S. exported to Japan in 2018 totaled $551.6 million, while Japanese auto exports to the U.S. were worth $40.3 billion. That’s a trade deficit of $39.8 billion. By comparison, it was $38.7 billion in 2016, so the trade deficit for new passenger vehicles and light trucks has increased by about 2.8%.