President Donald Trump inaccurately stated in his Sept. 1 tweet that Alabama “will most likely be hit” by Hurricane Dorian — a statement that was fact-checked in real time by the National Weather Service. Despite that, Trump has now twisted the facts by using an altered forecast map to support his inaccurate tweet and has looked for an apology from the “Fake News.”

This bizarre series of events started with a Sept. 1 tweet that included Alabama among the Southern states that “will most likely be hit” by Hurricane Dorian, which devastated the Bahamas and is making its way up the coast of the Carolinas.

In addition to Florida – South Carolina, North Carolina, Georgia, and Alabama, will most likely be hit (much) harder than anticipated. Looking like one of the largest hurricanes ever. Already category 5. BE CAREFUL! GOD BLESS EVERYONE!

Trump’s tweet came at 10:51 a.m., and the Birmingham office of the National Weather Service corrected the president 20 minutes later, saying, “Alabama will NOT see any impacts from #Dorian.”

Alabama will NOT see any impacts from #Dorian. We repeat, no impacts from Hurricane #Dorian will be felt across Alabama. The system will remain too far east. #alwx

That should have been the end of it, but Trump refused to simply admit his mistake.

The president has repeatedly defended the incorrect forecast for Alabama in a series of tweets and comments over the past several days, while disparaging the “Fake News” media for accurately reporting that he was wrong. He has even suggested the media owes him an apology.

On Sept. 2, Trump tweeted “in fact, under certain original scenarios, it was in fact correct that Alabama could have received some ‘hurt,'” accusing the media of “demeaning and belittling” him.

To support this claim, the president at the White House on Sept. 4 held up a map of the National Oceanic and Atmospheric Administration advisory #021, dated Aug. 29 at 11 a.m. AST, that had been altered by someone in the Trump administration with a black Sharpie.

The original NOAA map, which we display below, can be found on the NOAA National Hurricane Center website by using the “select advisory” drop-down menu to find “Advisory #021.” It clearly shows that the five-day track forecast cone, which represents “the probable path of the center” of the storm, does not reach Alabama. 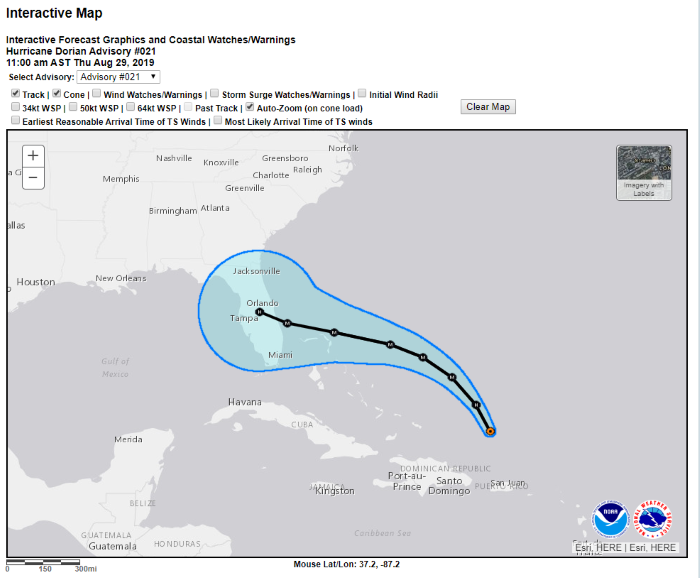 Here is an image of the altered map that Trump showed to reporters on Sept. 4 at the White House.

Trump’s map was changed using a black marker to show the cone extending beyond Florida and reaching Alabama. The black extension past Florida did not exist on the original map, but it supported his Sept. 5 tweet that “one model” showed that Alabama “would have been hit or grazed” before the hurricane changed course and moved further east.

The original map, without the black marker expanding the cone, also was issued three full days before Trump tweeted that Alabama “will most likely be hit” by Hurricane Dorian. As of Aug. 29 at 11 a.m., NOAA was forecasting that there was only a 5% to 20% chance that the southeast section of Alabama would see tropical storm force winds, which are sustained winds of 39 to 73 miles per hour.

Here’s the NOAA advisory #021 with an overlay of the projected wind speed that shows the potential impact on Alabama. The dark green ban is a 5%-10% chance of tropical storm force winds, and the lighter green next to it is a 10%-20% chance. 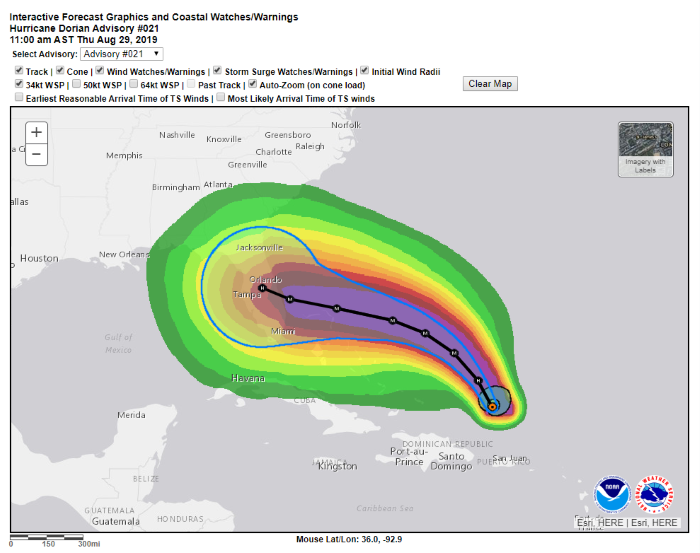 We did not receive a comment from the White House, but Trump may have conflated the path of the hurricane with the areas estimated to experience tropical storm force winds.

Subsequent NOAA advisories on Aug. 30 briefly showed the five-day track forecast cone — the path of the hurricane — clipping a small piece of Alabama, but the forecast cone was about 150 miles away from the state by the time Trump tweeted his warning on Sept. 1:

Friday, Aug. 30, 11 p.m., advisory #027: Nearly all of that southeast corner is back out of the track forecast cone. Some parts still have a 5%-20% chance of tropical storm force winds.

Saturday, Aug. 31, 5 a.m., advisory #028: All of Alabama is outside the track forecast cone for Hurricane Dorian, which is projected to travel up along the eastern coast of Florida. There’s still a small chance of tropical storm force winds, but the area potentially affected begins to shrink in forecasts throughout the day, as the storm is projected to head east after traveling up Florida’s coast.

Sunday, Sept. 1, 8 a.m., advisory #032A: This is the latest public advisory before Trump warned Alabama would “most likely” be one of the states “hit (much) harder than anticipated” by the hurricane, but the advisory shows just a sliver of the state with a 5%-10% chance of tropical storm force winds. The edge of the track cone at that point is about 150 miles away from Alabama. 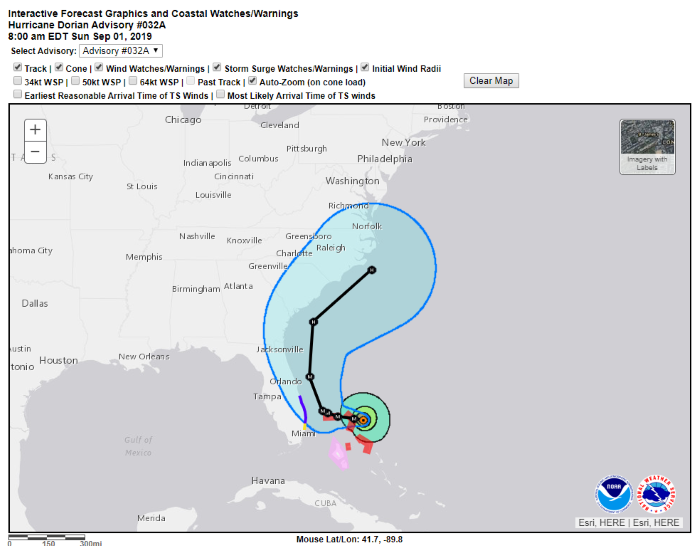 When asked about the altered map he had presented, Trump claimed there had been “a 95 percent chance probability” that Alabama was going to be hit in the “original forecast.” That’s not at all what NOAA’s National Hurricane Center advisories showed.

Trump, Sept. 4: I know that Alabama was in the original forecast. They thought it was get it — as a piece of it. It was supposed to go — actually, we have a better map than that, which is going to be presented, where we had many lines going directly — many models — each line being a model. And they were going directly through. And, in all cases, Alabama was hit — if not lightly, in some cases pretty hard. Georgia, Alabama — it was a different route. They actually gave that a 95 percent chance probability.

It turned out that that was not what happened; it made the right turn up the coast. But Alabama was hit very hard, and was going to be hit very hard, along with Georgia. But under the current, they won’t be.

The president later tweeted an Aug. 28 map from the South Florida Water Management District. That was four days before Trump’s comments on Alabama, and it doesn’t show a “95% chance probability” of the storm hitting Alabama. The spaghetti plot of many different models shows most forecasting the storm traveling up through or off the coast of Florida and then heading east. The SFWMD map also cautions: “These spaghetti plots are intended for use by individuals with proper training and expertise.”

The map further warns that National Hurricane Center advisories should “supersede this product,” and, “If anything on this graphic causes confusion, ignore the entire product.”

Trump gave outdated and inaccurate information about Alabama when he sent his tweet at 10:51 a.m. on Sept. 1. That’s a fact. The Birmingham office of the National Weather Service made that clear just 20 minutes later in its own tweet correcting Trump.

Instead of accepting that, the president has doubled down on his mistake — going so far as to publicly present a doctored forecast map — and falsely accused the media of inaccurately reporting the facts.

Update, Sept. 7: NOAA issued a statement on Sept. 6 that said, “The Birmingham National Weather Service’s Sunday morning tweet spoke in absolute terms that were inconsistent with probabilities from the best forecast products available at the time.” The statement cited hurricane advisories 15 through 41, issued from Aug. 28 to Sept. 2, that confirmed what we reported: There was a small chance of tropical storm force winds in a small portion of Alabama at the time of the Sept. 1 tweets by the president and the Birmingham National Weather Service.

Correction, Sept. 9: The NOAA legend for the probability of sustained winds shows a range of percentages. We initially misread that legend, and we have corrected the story accordingly.

Update, Sept. 9: Louis Uccellini, the director of the National Weather Service, spoke during the National Weather Association’s annual meeting in Huntsville, Alabama, on Sept. 9 about the Birmingham NWS office’s Sept. 1 tweet. “They did what any office would do — with an emphasis they deemed essential to shut down what they thought were rumors,” Uccellini said. “They quickly acted to reassure partners, the media and the public with strong language that there was no threat from tropical storm affecting the state and local communities at that time. And they did that based on past experiences to ensure clarity and impact. They did that with one thing in mind: public safety. And they responded not knowing where this information was coming from. Only later when the retweets and the politically based comments came into their office did they learn the sources of this information. Nevertheless, they were correct in clarifying that the threat was very low. …

“So, let me be clear: The Birmingham office did this to stop public panic, to ensure public safety, the same goal as all the National Weather Service offices were working toward at that time.”