Dr. Deborah Birx, the coordinator of the White House coronavirus task force, misleadingly claimed that 19 states — “almost 40% of the country” — “have less than 200 cases” of COVID-19, the disease caused by the virus. In fact, 17 states with 7.2% of the U.S. population have fewer than 200 confirmed cases each.

Birx made her remarks at a task force press briefing at the White House on March 26 on a day when the United States passed China and became the country with the most confirmed coronavirus cases in the world. As of March 26, the U.S. had more than 83,000 confirmed cases and more than 1,200 deaths, according to data collected by John Hopkins University.

At the same briefing, President Donald Trump spoke about wanting to soon open “large sections of our country that aren’t so seriously affected.” The president has said he would “love to have the country opened up and just raring to go by Easter,” as he put it during a Fox News virtual town hall on March 24.

Public health officials have warned that going back to business in a couple of weeks would worsen the coronavirus outbreak. “This disease will not respect state borders and city borders, and will move around this country just like it’s moved around the world,” Tom Inglesby, the director of the Johns Hopkins Center for Health Security, told the New York Times.

Birx — formerly the U.S. global AIDS coordinator — lent support to Trump’s basic message that large sections of the U.S. aren’t seriously affected. But she was actually speaking about a small section of the country in terms of population.

Birx, March 26: So just as a summary of where it looks domestically — I won’t talk so much about the global issues this time: We do have 19 out of our 50 states, to be reminded, that had early cases but have persistently low level of cases and, at this point, have less than 200 cases. So that’s almost 40% of the country with extraordinarily low numbers.

First, using the data collected by John Hopkins University, we found that only 17 states — not 19 — had fewer than 200 cases as of March 26, when Birx made her remarks. 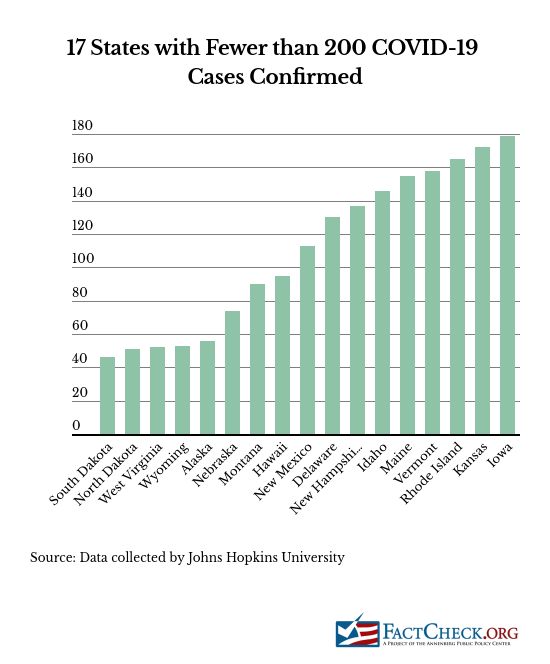 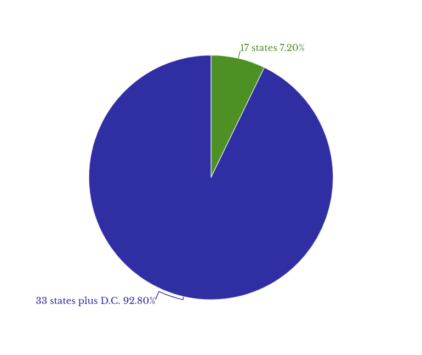 Five of the 17 states have fewer than 1 million people each. South Dakota, population 884,659, had the fewest COVID-19 confirmed cases with 46 cases, according to John Hopkins University.

California alone has more residents than the 17 states combined. The Golden State has a population of 39.5 million people. It also has 3,899 confirmed cases as of March 26.

We would caution that these are only the confirmed cases, based on the testing the states have done. Some tests may still be pending, and some states have conducted more testing than others.

But while Birx boasts about “almost 40% of the country with extraordinarily low numbers,” the fact is that only 7.2% of the population lives in those states.