Facebook posts falsely claim that House Democrats included $25 million to boost their own salaries in their proposal for the coronavirus-related stimulus package. That funding is not for legislators’ pay increases; it’s also in the bill being advanced by the Republican-controlled Senate.

Members of Congress are working toward passing a bipartisan, nearly $2 trillion stimulus package to bolster the economy in response to the novel coronavirus pandemic. It would include direct payments to Americans, loans for small businesses, support for hospitals and more.

But online, some on social media are using various memes and posts to spread a falsehood that House Democrats are also trying to slip in $25 million to increase their own pay. 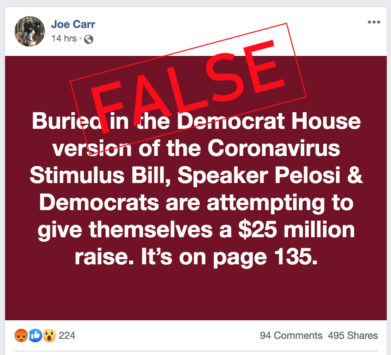 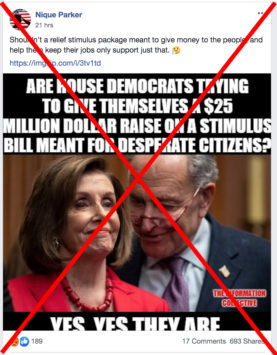 A number of the posts specifically refer to a $25 million funding allocation for the House referenced in a version of the package proposed by House Democrats on March 23.

That House proposal included $25 million for “Salaries and Expenses” for the chamber — which would be “allocated in accordance with a spend plan submitted to the Committee on Appropriations of the House of Representatives by the Chief Administrative Officer and approved by such Committee.”

But the bill never said it was for legislators’ salaries. Nor does the version of the stimulus package being worked out in the Republican-controlled Senate — the Coronavirus Aid, Relief, and Economic Security Act, or CARES Act — which similarly outlines $25 million for the House.

A spokesman for the House Appropriations Committee called the pay-raise claims circulating online “absurd and inaccurate.”

“The funding is to support the House’s capability to telework, including for the purchase of equipment and improvements to the network,” Evan Hollander told us in an email. “It will also provide for reimbursement costs for the staff of the House Child Care Center and covers the costs of the House food service contracts. In addition, it will support the Sergeant-At-Arms on continuity of operations matters.”

Also, as we said, the $25 million funding for the House is included in the Senate version of the package, according to draft legislation posted March 25 by the Senate Appropriations Committee. The measure — which includes $93 million for the legislative branch collectively, including $10 million for the Republican-controlled Senate — has been agreed to in principle by congressional leaders and the White House.

A document posted by the Senate Appropriations Committee breaking down emergency appropriations in the package describes the $25 million allocated for the House in the same way Hollander does.

It’s important to note, as we’ve explained before, that the 1989 Ethics Reform Act established an automatic adjustment formula to decide annual changes to lawmakers’ salaries.

That automatic adjustment formula is “based on changes in private sector wages and salaries as measured by the Employment Cost Index,” according to the Congressional Research Service. The percentage increase cannot surpass that for federal employees who fall under the “General Schedule” classification. It automatically goes into effect unless Congress statutorily denies it, which it has done every year since 2009.

Democrats had considered in mid-2019 ending that decade-long hiatus and allowing the automatic pay increase to go through, but backed away from the idea following a backlash from within the party.