But misleading comparisons persist, and recent social media posts twist the facts about the timing of emergency declarations for the two outbreaks. 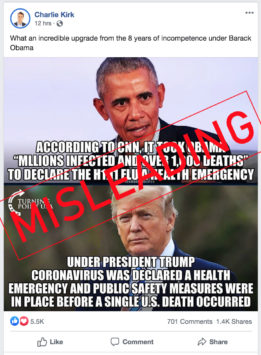 “[I]t took Obama ‘millions infected and over 1,000 deaths’ to declare the H1N1 flu a health emergency,” read a March 29 meme on the verified page of Charlie Kirk, the founder of the conservative youth organization Turning Point USA. But under Trump, “coronavirus was declared a health emergency and public safety measures were in place before a single U.S. death occurred.”

That’s wrong. Both the Obama and Trump administrations declared public health emergencies before the first reported deaths relating to the novel coronavirus and H1N1.

The meme actually compares the point at which Trump declared a public health emergency and the point at which Obama issued a national emergency — two distinct processes. A spokesman for Turning Point USA acknowledged in an email that its “social media team confused the two different types of emergency declarations.”

A public health emergency, declared by the secretary of Department of Health and Human Services, gives the federal government and states certain flexibilities, such as temporarily reassigning personnel, to respond to a major health issue. A national emergency declared by the president is more substantial and can provide access to significant sums of federal money and resources.

Turning Point USA deleted the image after our inquiry, but other posts of the same meme are still on Facebook, and the claim also migrated to Twitter (and back to Facebook).

Here’s an actual (albeit abridged) timeline for the emergency declarations for each pandemic.

In addition to being wrong, the posts misleadingly suggest that while Trump took decisive action on the coronavirus outbreak and put “public safety measures” in place, Obama failed to do the same when it came to H1N1.

As we’ve previously explained, the CDC began releasing antiviral drugs to treat the H1N1 flu on April 26, the same day of Obama’s public health emergency declaration, and two days later the FDA approved a new CDC test for the disease. By April 30, Obama formally requested $1.5 billion from Congress to address the outbreak (the Obama administration later asked for nearly $9 billion). And a vaccine was made available in about six months.

“Declaration of a National Emergency with Respect to the 2009 H1N1 Influenza Pandemic.” Obama White House. 24 Oct 2009.

“Statement on the second meeting of the International Health Regulations (2005) Emergency Committee regarding the outbreak of novel coronavirus (2019-nCoV).” World Health Organization. 30 Jan 2020.