A viral post compares side-by-side screenshots from two news websites to falsely claim that using the same image of people at the beach during the COVID-19 pandemic is an example of media deception. The location of the scene in Jacksonville, Florida, is identified accurately in each news report.

Just over a month after the World Health Organization declared COVID-19 to be a pandemic, the White House issued guidance for states to start lifting business restrictions implemented to slow the spread of the disease.

A day after that announcement, some beaches in Florida reopened on a limited basis. A picture of crowds on one such beach was used recently by two different news websites.

The New York Post used it to illustrate a story about beaches opening on a limited basis near Jacksonville, Florida, which is where the photo was taken.

The other site used it in a Facebook post that linked to a regularly updated blog about the pandemic, which, at the time, included an entry about beaches opening in Florida. That blog also included an entry on the COVID-19 death toll in Los Angeles, which provided the headline that showed up on Facebook underneath the picture. That juxtaposition could have confused readers, but anyone who clicked through on the link would have seen that the blog covered multiple issues.

The site that posted the link on Facebook is called News Break, a news aggregating company. A spokesman for News Break, Greg Vederman, explained in a phone interview that the site’s algorithm handles social media posts. In this case, it pulled a picture from the blog showing the beach in Florida and a headline about the death toll in Los Angeles. 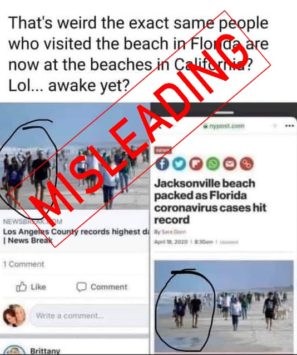 Side-by-side screenshots of the same photo being used under different headlines are now circulating in a viral social media post suggesting that they prove the media is deceitful. Above the two screenshots is text that says: “That’s weird the exact same people who visited the beach in Florida are now at the beaches in California? Lol… awake yet?”

But there’s nothing amiss in how the photo was used in either case.

NBC News. “Some states ease restrictions as protestors call for reopening economy — Here are the latest updates from around the globe.” As of 18 Apr 2020.