A bogus meme on Facebook suggests that the news media has tried to pass off one man’s death, attributed to complications from COVID-19, as two separate cases. But the headlines cited simply focused on different parts of his biography.

Thousands of Facebook users are spreading a false suggestion that two different headlines show that a man’s apparent COVID-19-related death has been reported by the news media as two different cases.

The news reports behind those headlines, however, show nothing of the sort.

“Corona is so bad, this guy died twice! #FakeNews” the viral meme reads. It contains two side-by-side, different headlines that were each paired with the same photo of the man, Lenard Wells, who died on March 21.

“69-year-old retired Milwaukee police lieutenant died from COVID-19,” reads the left headline, which we found was reported by FOX6 in Milwaukee.

The headline on the right, from KIRO-TV in Seattle (republished from Fox13 Memphis), reads: “University of Memphis professor dies from coronavirus, report says.” 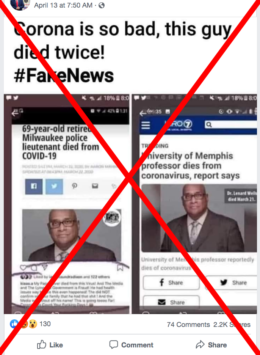 But the stories both reported on the death of Wells; the headlines simply amplified different aspects of his biography.

Wells was an instructor at the University of Memphis and previously worked as a lieutenant for the Milwaukee Police Department. He worked on the force from 1973 to 2001 and also served as chairman of the State of Wisconsin Parole Commission, from 2003 to 2006, according to his curriculum vitae on an archived version of his website.

So the meme, not the news outlets, is spreading the misinformation.

One user wrote: “Same man, from Milwaukee, and again, same man from. Memphis, DIED TWICE, from Corona. Democratic Socialist Media is spreading Fear.” Another caption read: “Check out this fake media. Man dies twice in two different cities. Instead of one death now they have two deaths on the books for the scamdemic.”

The meme also shows an Instagram caption, from a user identifying herself as a family member of Wells, claiming he did not die from the novel coronavirus — it says “He had health issues way before this even happened!” and calls the media and government “fraud.”

A Milwaukee County Medical Examiner’s Office representative provided FactCheck.org with a summary of its findings, which lists the immediate cause of death as “Complications of novel Coronavirus (COVID-19) infection.” The office made note of “Other Significant Conditions” including “Diabetes mellitus, hypertension, chronic obstructive pulmonary disease, coronary atherosclerosis, obesity.”

We tried to contact the Instagram user and members of Wells’ family to learn whether or not they dispute the office’s findings, but were unsuccessful.

Either way, the viral claim that the news reports have misrepresented one man’s death as two separate cases is undercut simply by reading the reports under the headlines.

The claim feeds into the unsupported theory that the official COVID-19 death toll has been inflated. As we’ve previously explained, experts actually think the official tally is likely an underestimate.

It’s worth noting that the U.S. Centers for Disease Control and Prevention says that, based on current information, those “at high-risk for severe illness from COVID-19” include those 65 and older, and people of all ages with underlying medical conditions — such as chronic lung disease, serious heart conditions, impaired immune systems, severe obesity and diabetes, among others.

Dr. Deborah Birx, the coordinator of the White House coronavirus task force, addressed the interplay of COVID-19 and underlying medical conditions during an April 8 press briefing.