Headlines shared across social media caused some to wrongly believe the White House is selling coins commemorating the COVID-19 pandemic. The coin referenced is being sold by the White House Gift Shop, which is a private company based in Pennsylvania.

The White House is not selling coins related to the novel coronavirus pandemic, as some on social media have wrongly suggested.

But a COVID-19 themed coin is being sold by the White House Gift Shop — a private business that is not part of the federal government, although its origins decades ago are tied to the White House.

The company garnered attention when it began offering the coin for $125 (though it’s currently on sale for $100) as part of its “Historic Moments in History Series.”

“WORLD vs VIRUS,” reads a mock-up with a novel coronavirus graphic. “Together We FOUGHT The UNSEEN Enemy. The back shows a White House lectern and celebrates the “COVID-19 Task Force” and includes President Donald Trump’s name, as well as those of Vice President Mike Pence and other members of the White House coronavirus task force.

The company says it will donate proceeds from the coin to COVID-19 medical research.

Headlines about the coin began circulating on social media on April 29, causing confusion by virtue of the company’s name — and prompting posts of outrage on left-leaning accounts.

On Twitter and Facebook, Sen. Bernie Sanders’ official Senate accounts suggested the coin was a product of the White House while sharing a link to a Daily Beast story (which does indicate that the company is privately run). 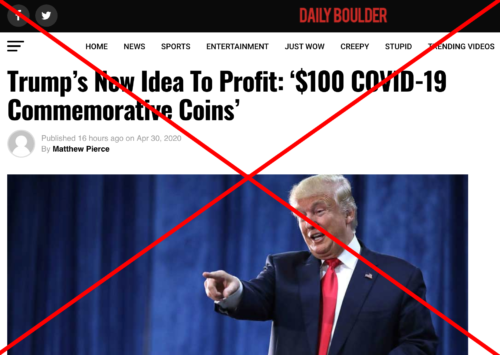 “If the White House Gift Shop is going to produce $100 COVID-19 coins, Trump can sure as hell utilize the Defense Production Act to manufacture the gloves, gowns, and masks our medical workers desperately need,” the Sanders posts said.

The Occupy Democrats Facebook group also shared the Daily Beast story and misleadingly wrote, “WHAT IS WRONG WITH TRUMP? Who would want these?”

Other headlines also falsely indicated the coin was coming from the actual White House, or that Trump somehow stood to profit from it.

In 2018, when the company sold a coin celebrating the meeting between Trump and North Korea leader Kim Jong Un, the website Talking Points Memo published a report looking into the history of the shop. It pointed to documents filed in connection with the trademark applications showing that the company’s current CEO, Anthony Giannini, officially acquired the operation in 2013 from the now-defunct United States Secret Service Uniformed Division Benefit Fund.

An archived version of the shop’s website from May 2000 describes the fund’s origins as dating back to 1946, with the start of the White House Police Benefit Fund. That fund provided flowers for officers who “had a death in their immediate family” and offered “retiring members a departing gift from the force.” The effort expanded, however, following the 1950 killing of a White House police officer during an assassination attempt on President Harry Truman.

In the years that followed, the website’s history noted, the Uniformed Division Benefit Fund was formed and revenue was “generated through the sale of various commemorative items.” Its gift shop operated in the Old Executive Office Building, and later moved to a nearby space to make it publicly accessible. The Uniformed Division Benefit Fund filed for bankruptcy in 2013.

The gift shop now operates online and no longer has a physical space in Washington, D.C. The company today says it “continues to actively support Law Enforcement Departments or Agencies by funding special advanced firearms training and by purchasing safe and effective arms for departments often in smaller jurisdictions with limited advanced training budgets.”

We reached out to the company but didn’t hear back. But Giannini, the CEO, also confirmed to the fact-checking website Snopes that the business “is not affiliated with The White House, nor is The White House involved in any of our decisions, products, or operations.”