A TV station’s report on a Michigan fine for those violating the state’s social distancing orders showed Gov. Gretchen Whitmer at a signing ceremony with an intimate crowd of people — prompting accusations of hypocrisy on social media. But the footage used was from January 2019.

The Michigan Department of Health and Human Services announced an emergency order on April 2 implementing a civil fine of up to $1,000 for those violating the state’s social distancing requirements related to COVID-19.

Gov. Gretchen Whitmer, however, did not sign that order at a crowded, shoulder-to-shoulder ceremony, as a viral screenshot of a TV news report suggests.

The screenshot includes an image of Whitmer with an intimate group behind her and a chyron that reads: “State emergency order calls for fines up to $1,000 for ignoring social distancing.”

But the footage used was actually from the start of Whitmer’s term, in January 2019, and dealt with an executive directive that had nothing to do with the novel coronavirus — as the station behind the report has since acknowledged.

Across social media platforms, the report’s misleading juxtaposition of the footage and headline has fueled false claims of hypocrisy as posts of the screenshot have racked up tens of thousands of shares and likes. 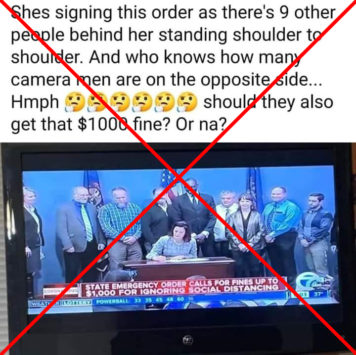 “Shes signing this order as there’s 9 other people behind her standing shoulder to shoulder. And who knows how many camera men are on the opposite side,” a meme on Facebook claims. “Should they also get that $1000 fine? Or na?”

Another post of the screenshot with the erroneous claim appeared on the verified Instagram account of Tim Kennedy, a former UFC fighter, who wrote: “The Governor of Michigan signs a measure setting $1,000 fine for ‘citizens’ who fail to keep a 6-foot social distance ….. #irony #hypocrite #cantmakethisup #covid19 #covid #covid_19 #tyranny.”

Texas Sen. Ted Cruz was among those who advanced the falsehood, sharing an April 12 tweet of the claim, prompting Whitmer to respond.

“Hello Senator! This photo is from January of 2019, and is being misused to spread fear and anger,” Whitmer wrote. “I know you would never intentionally mislead the public during a pandemic, so I’m hopeful you’ll correct this mistake as soon as possible. Stay safe, & happy Easter from Michigan 👋.”

Cruz said in a later post on the matter: “When I found out the story was erroneous, I deleted the tweet.” Cruz cast blame on a “MSM” — mainstream media — “error.”

On April 13, the station behind the report — WXYZ, the ABC affiliate in Detroit — published a post addressing the “viral Whitmer photo” and said that “the video has caused confusion.” The screenshot was taken from “a WXYZ report that aired on 7 Action News This Morning last week. It was part of a story on the $1,000 fines for those who violate the state’s social distancing order.

“News organizations routinely rely on file video, like the Governor’s signing ceremony from January 2019, when broadcasting stories where more current video may not be readily available,” the station said. “While the report did not expressly identify the video as the Governor signing the social distancing order, it should not have been used in this story as it allowed for confusion and misinterpretation.”

A spokeswoman for the Michigan Department of Health and Human Services told us there was no in-person signing ceremony for the recent order implementing the $1,000 civil fine.

Whitmer, a Democrat, has become known nationally during the coronavirus outbreak for her public criticism of the Trump administration’s handling of the crisis. Former Vice President Joe Biden, the presumptive Democratic nominee for president, has said Whitmer is on his list of potential running mate choices.

Cruz, Ted (@tedcruz). “I RT’ed a former LA Times reporter who had tweeted pics that mistakenly ran on the ABC local news broadcast. When I found out the story was erroneous, I deleted the tweet. Gosh, Brian, why does your tweet omit the MSM error that started it? Or does CNN only exist to attack GOP?” Twitter. 13 Apr 2020.

“MDHHS issues Emergency Order requiring compliance with Executive Orders under penalty of civil fines up to $1,000 and referral to licensing agencies for enforcement.” Michigan Department of Health and Human Services. 2 Apr 2020.

The 11th Hour with Brian Williams (@11thHour). “How many names are on @JoeBiden‘s potential VP shortlist? The former vice president joins us for an in-depth conversation tonight at 11PM ET. Learn more: https://nbcnews.to/2JwhpOa #11thHour.” Twitter. 31 Mar 2020.

Whitmer, Gretchen (@GovWhitmer). “Hello Senator! This photo is from January of 2019, and is being misused to spread fear and anger. I know you would never intentionally mislead the public during a pandemic, so I’m hopeful you’ll correct this mistake as soon as possible. Stay safe, & happy Easter from Michigan 👋.” Twitter. 12 Apr 2020.