There’s no evidence that Bill Gates ever visited Jeffrey Epstein’s private island in the Caribbean, contrary to a viral Facebook post claiming he went there numerous times. The “flight records” cited do not show that.

Bill Gates and his philanthropic foundation, which has committed millions to fund treatment and vaccine research for the novel coronavirus, have been central targets of recent online falsehoods relating to the pandemic.

Now, a viral Facebook post being shared with comments disparaging Gates is revisiting the Microsoft co-founder’s connection to the financier and sex offender Jeffrey Epstein — and distorting the facts in the process.

That is not a fact — and after we reached out to the Facebook user who published the post, he changed the text to instead claim that the “records” showed Gates visited the island “multiple times.” But that’s also incorrect.

More than 100 pages of flight logs for Epstein’s private plane, among other records from a lawsuit brought by one of Epstein’s victims, were unsealed by a federal appeals court last year. 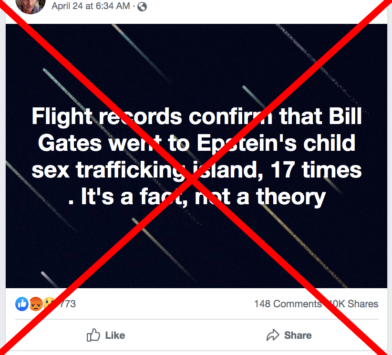 Those flight records, from 1995 to 2013, report one instance of Gates flying on Epstein’s aircraft — and not to Epstein’s private island in the Caribbean. The March 2013 flight actually went from Teterboro Airport, in New Jersey, to Palm Beach International Airport in Florida.

When we contacted the Facebook user who shared the post for any evidence backing up his claim, he told us that previous “posters” had also “claimed the same” and sent us a link to flight logs for Epstein’s plane that were uploaded in 2015 by the website Gawker. But those logs, which documented periods from 1997 to 2005, do not show any references to Gates.

Screenshots of the initial post also have spread on Facebook. A similar unsupported claim appeared on Reddit in early April, declaring, “Bill Gates, who is running the CoVid-19 scam, frequented Epstein Island.”

Epstein, who was facing federal charges for allegedly sexually abusing dozens of young girls, died in August 2019 in what officials declared a suicide in his prison cell.

Over the years, Epstein had courted many high-profile individuals, including former President Bill Clinton and President Donald Trump.

The New York Times last year documented “numerous” meetings between Gates and Epstein that began in 2011 — after Epstein had pleaded guilty to soliciting an underage girl for sex in 2008. Epstein also reportedly met with officials from the Bill & Melinda Gates Foundation.

In regards to the flight from New Jersey to Florida, Bridgitt Arnold, a spokeswoman for Gates, told the Times that Gates wasn’t aware it was Epstein’s plane. She was quoted as saying, “Bill Gates regrets ever meeting with Epstein and recognizes it was an error in judgment to do so.”

“Gates recognizes that entertaining Epstein’s ideas related to philanthropy gave Epstein an undeserved platform that was at odds with Gates’s personal values and the values of his foundation,” Arnold said.

Speaking during a November 2019 public event hosted by the Times, Gates himself described his meetings with Epstein as a “mistake in judgement,” and one borne out of his belief that the discussions would lead to “billions of dollars” for global health efforts.

“That was a mirage,” Gates said. “None of that money ever appeared, and I gave him some benefit by the association, so I made a doubly wrong mistake there.”

The Epstein flight records have been the subject of previous false claims on social media.

Flitter, Emily and James B. Stewart. “Bill Gates Met With Jeffrey Epstein Many Times, Despite His Past.” New York Times. 12 Oct 2019.