At a May 12 Senate committee hearing on COVID-19, while questioning National Institute of Allergy and Infectious Diseases Director Anthony Fauci, Sen. Elizabeth Warren said, “We are right now at … 25,000 new infections a day and 2,000 deaths a day.”

Later in the day, White House Press Secretary Kayleigh McEnany called out Warren for using what she called “some funny numbers.”

McEnany said she had discussed the statistics with Deborah Birx, the White House’s coronavirus task force response coordinator, “and she helped me to correct those numbers, which I’d like to correct here. Because I think it’s unfair to the American people to give inflated case numbers and mortality numbers, because it leads to those same Americans making the decision to not get a mammogram, to not have the cancer screenings they need.”

The disparity is largely a matter of semantics. Warren, a Massachusetts Democrat, said “new infections a day,” suggesting totals over a period of time. She used that phrase several times at the hearing. McEnany said “today,” which is much more limited, and “today,” of course, was far from over when Warren was questioning Fauci in the Senate Health, Education, Labor and Pensions Committee hearing.

The argument comes as President Donald Trump has encouraged governors to reopen their states and some Democrats have questioned whether it’s too soon to do so. In fact, Warren cited the numbers as she pressed Fauci on whether or not the novel coronavirus had been “contained” and whether the U.S. had enough “robust countermeasures” in place. 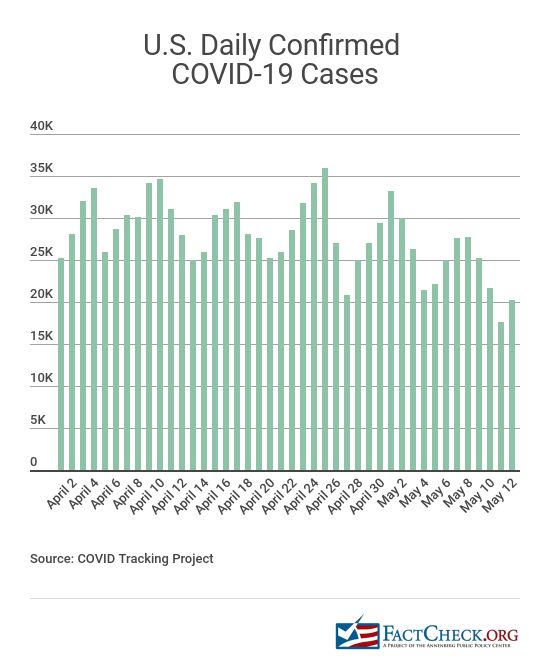 According to the COVID Tracking Project, there were 837 deaths on May 11. There also were fewer than a thousand the day before that. The numbers fluctuated earlier in the month, twice surpassing 2,500, nearing 2,000 on another occasion and falling to 912 on May 3. 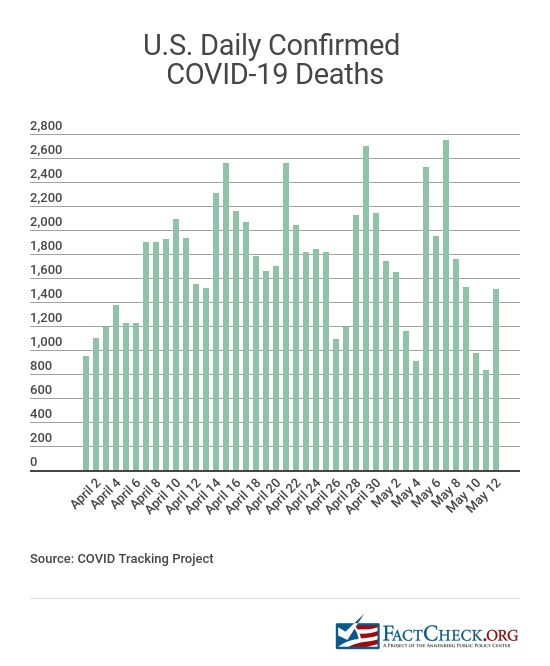 So, the numbers vary by day, making any figures about “today” — McEnany’s word, not Warren’s — different from a broader look at a period of time.