An Instagram page for the website WokeHub.com claimed, for example, that “donations made to Black Lives Matter website go directly to the DNC” and that BlackLivesMatter.com “appears to be an international money laundering program used by the Democratic National Committee.” A similar claim appeared on the conspiracy theory website InfoWars.com. 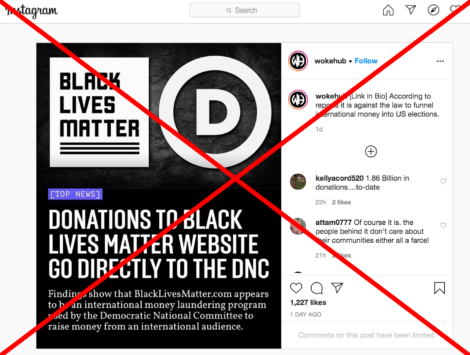 Conservative personality Candace Owens also put the claim before her more than 1 million followers on Instagram, where she claimed “BLACK LIVES MATTER FUNDING GOES DIRECTLY TO WHITE DEMOCRATS AND THEIR VARIOUS INITIATIVES TO GET DEMOCRATS INTO OFFICE.”

But the claims — perhaps worsened by public confusion over the structure of the organization, which we’ll explain later — are based on a distortion of facts regarding the nonprofit ActBlue, which provides fundraising infrastructure to Democratic campaigns and progressive organizations.

There are a number of groups that use the phrase “Black Lives Matter” in their name. There is a “Black Lives Matter Foundation,” for example, whose president confirmed to us that it is not related to the organization behind BlackLivesMatter.com — which is at the center of the viral claims.

BlackLivesMatter.com is operated by an umbrella Black Lives Matter organization called the Black Lives Matter Global Network. The effort started in 2013 following the acquittal of George Zimmerman in the killing of Trayvon Martin.

To collect donations, the website uses ActBlue Charities, a 501(c)(3) organization that specifically makes the platform available to charitable organizations.

Owens’ Instagram post features a video showing that BlackLivesMatter.com uses ActBlue for its donations. It then shows an OpenSecrets.org breakdown of expenditures by ActBlue made in the 2020 cycle; the top recipients are the presidential campaigns of Sen. Bernie Sanders, former Vice President Joe Biden, and Sen. Elizabeth Warren.

But the video misrepresents how ActBlue works. ActBlue isn’t itself donating money. It’s just the online platform that campaigns and groups use to solicit and collect donations.

Campaign finance experts told us that it’s false to say that donations to the Black Lives Matter group are going to the Democratic National Committee, or to Democratic presidential campaigns, simply because the website uses ActBlue.

“ActBlue lets candidates and liberal nonprofit organizations set up their separate accounts,” Michael Malbin, director of the nonpartisan Campaign Finance Institute, told us in a phone interview. “There’s no crossing from one account to another. If you give the money to Sanders, it does not go to Biden.”

Malbin — a professor of political science at the University at Albany, State University of New York — said candidates and organizations use ActBlue “for the ease of transactions.”

“ActBlue has no discretion over” where to direct individuals’ contributions, he said. The money “you see coming through ActBlue is coming through it, not from it.”

“When you donate on an ActBlue or ActBlue Charities page, the donation is earmarked for the group listed on the form,” Caleb Cade, a spokesperson for ActBlue, told us in an email. “We pass along the contribution directly to the receiving campaign or entity. We do not choose the recipient of the contribution, the donor does.”

In a statement to FactCheck.org, the Black Lives Matter Global Network’s managing director, Kailee Scales, said that the claims about the money being routed to Democrats are part of “an organized disinformation campaign against BLM, from actors clearly trying to blunt the growing support for this movement.”

“All contributions to the DNC are publicly reported to the FEC and review of FEC reports will confirm there has never been any donation from this organization,” she said.

The Operations of the Black Lives Matter Global Network

The claims seem to have flourished amid confusion over the structure of the Black Lives Matter Global Network, which is incorporated in Delaware.

The ActBlue donations page on the website specifically says that the money given will “benefit Black Lives Matter Global Network.”

Technically, the network also has structured a foundation — the Black Lives Matter Global Network Foundation — which is “fiscally sponsored” by a global nonprofit called Thousand Currents, according to Jenesha de Rivera, director of finance and administration at Thousand Currents.

The partnership between the network and the nonprofit (formerly the International Development Exchange) was announced in 2016. The nonprofit organization said it would provide “fiduciary oversight, financial management, and other administrative services to BLM.”

Cade, the ActBlue spokesperson, confirmed that the donations made through ActBlue go to Thousand Currents for Black Lives Matter.

“Using a fiscal sponsorship arrangement offers a way for a cause to attract donors even when it is not yet recognized as tax-exempt under Internal Revenue Code Section 501(c)(3),” according to the National Council on Nonprofits. “In essence the fiscal sponsor serves as the administrative ‘home’ of the cause. Charitable contributions are given to the fiscal sponsor, which then grants them to support the cause.”

Black Lives Matter Global Network Foundation “is an organization within Thousand Currents,” de Rivera said in a phone interview, “so it can accomplish its charitable purpose prior to receiving its approval from the IRS for its own 501(c)(3).”

De Rivera said the foundation has applied to become its own 501(c)(3). We asked the Black Lives Matter group for a copy of its Form 1023, which is used to apply for that designation, but didn’t hear back. An IRS spokesperson said copies are only publicly available if the organization is approved for 501(c)(3) status.

On the claims that money is being given to Democratic campaigns, de Rivera said that Thousand Currents’ own 501(c)(3) status would be “in jeopardy” if charitable donations made through the organization were rerouted to political campaigns.

A Thousand Currents audit for 2019 shows that, as of June 2019, the organization held nearly $3.4 million in net assets for Black Lives Matter. It had released nearly $1.8 million to the group in the last fiscal year.

The audit also provides a breakdown of how the foundation (referred to as the “fiscal project” under a statement of functional expenses, according to de Rivera) spent that $1.8 million in buckets — including on consultants and salaries.

And, Leff said in an email, because ActBlue Charities is also a 501(c)(3), it is his “understanding … that both ActBlue Charities and Thousand Currents have a legal obligation to make reasonable efforts to ensure that the funds they receive are spent consistent with 501(c)(3) restrictions.”

On June 11, the Black Lives Matter Global Network Foundation said in a press release that, thanks to donations, it would make $6.5 million available through grants that will be available to “all chapters affiliated” with it.