A Facebook post about protests taking place in the aftermath of George Floyd’s death is criticizing protesters for “destroying the cemeteries” of veterans. But three of the four images cited are old and have nothing to do with the protests.

The protests against police brutality following the death of George Floyd, a black man who died in police custody in Minneapolis, have at times been followed by vandalism and looting.

But a Facebook post is accusing protesters of “destroying” tributes to veterans by spreading photos of vandalized memorials that in reality are years old and have nothing to do with the protests. Only one of the four pictures is current and related. 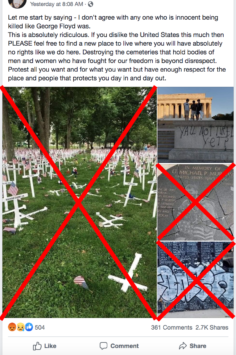 “Let me start by saying – I don’t agree with any one who is innocent being killed like George Floyd was,” the post reads. “This is absolutely ridiculous. If you dislike the United States this much then PLEASE feel free to find a new place to live where you will have absolutely no rights like we do here. Destroying the cemeteries that hold bodies of men and women who have fought for our freedom is beyond disrespect.”

We found that three of the four images that are paired with the post are old and unrelated to the recent protests against police brutality:

Only one of the four images used is related to the current protests. It shows vandalism at the base of the Lincoln Memorial in Washington, D.C.

National Mall and Memorial Parks, a part of the National Park Service, shared a photo of that defacement — the spray paint reads, “Yall not tired yet?” — in a May 31 tweet about vandalism that occurred amid demonstrations the night before.

The tweet also included two other photos, showing that the World War II Memorial and the statue of General Casimir Pulaski were also defaced.

The Facebook post could have made its point by showing the National Mall and Memorial Park’s photos of vandalized memorials. But none of those photos — or the ones in the Facebook post — show protesters “destroying the cemeteries that hold bodies of men and women who have fought for our freedom,” as the post said.