Social media posts erroneously suggest that President Donald Trump’s campaign hats are made in China, while those for former Vice President Joe Biden’s campaign are made in the U.S. The official hats sold by both campaigns are made by American companies.

Social media posts are wrongly suggesting that President Donald Trump’s campaign has its iconic red hats made in China, while former Vice President Joe Biden’s campaign uses a U.S. manufacturer for its hats.

The criticism levied by the posts hits at the core of Trump’s message of “America First,” but it’s wrong.

The posts in question use photos comparing a pro-Trump and a pro-Biden hat, and their respective labels.

But while the red “Make America Great Again” hat pictured in the posts does show a label indicating it was made in China, that doesn’t mean it was a hat that came from the campaign, as the various posts either explicitly or implicitly claim.

A Facebook page called “Trump Sucks” posted the photos on Oct. 19 with the caption: “Typical Trump.” It was shared nearly 3,000 times from there and later deleted. But we found that the same claim has been repeatedly shared in recent weeks and months on Facebook and Twitter. One tweet posted in August reads: “It’s classic: Trump campaign hats made in China. Biden campaign hats made in USA.”

The Trump campaign’s website, however, touts all of its “official” hats as being “Proudly Made in USA.” And reports filed with the Federal Election Commission show the campaign regularly pays two companies in the U.S. for the production and distribution of its hats. 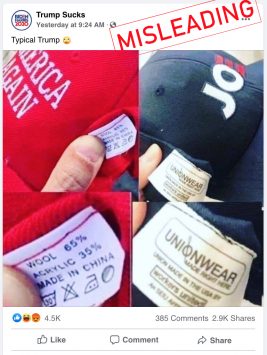 A 2018 Business Insider video spotlighted the Cali-Fame factory in California where the campaign’s official “MAGA” hats are made. It noted that the hats are then shipped to Ace Specialties in Louisiana. Ace is the official merchandise distributor for the Trump Make America Great Again Committee — a joint fundraising committee run by the Trump campaign and the Republican National Committee. The committee operates the campaign’s online store and all purchases through the shop are considered a donation to the committee.

The Trump campaign in that period also reported disbursements totaling $840,900 to Cali-Fame for hats and delivery services. It paid another $1.7 million to Ace for purchases of hats as well as other goods — such as signs, shirts and buttons — according to disbursement descriptions.

Other fact-checkers have addressed the false claim that Trump has his MAGA hats made in China before — as far back as 2015. Meanwhile, there have been reports over the years of unofficial hats being made overseas.

In 2018, readers asked us whether Trump 2020 banners were being made in China. As we wrote then, there were reports of such banners being made in China, but the Trump campaign said they were not their orders. It was unclear who had ordered those banners.

“We have made it clear all along that all of our merchandise is 100% made in the USA. Any vendor who claims to have a relationship with us otherwise is lying or violating our protected trademark rights,” the campaign’s chief operating officer said in a statement at the time. “This applies to all of the recent fake news about Made in China products for the 2020 campaign.”

As far as the Biden campaign’s “JOE” hat shown in the social media posts, the label indicates it was made by Unionwear in New Jersey. Unionwear CEO Mitch Cahn told us in an email that his company manufactures the hats sold for the Biden campaign though BumperActive, which manages the campaign’s online store.

But Cahn’s company has made hats supportive of Trump, too.

In the 2020 election cycle, he said, the company has manufactured hats “for merchandise companies selling to more decentralized campaign offices, such as California for Trump or Women for Trump.”

“We do not do any work for the Trump national campaign or its merchandise company, Ace Specialties — however at any given time we have 20-30 pro-Trump orders in house,” Cahn said.

Fares, Melissa and Dustin Volz. “It’s made in Vietnam!’ At inauguration, origin of red Trump hats shocks many.” Reuters. 20 Jan 2017.