A Republican TV ad falsely suggests that “liberal megadonors” are spending $1 billion in “dark money” to help Democrat Jon Ossoff in Georgia’s Senate runoff race. That’s how much multiple experts estimate may be spent on all candidates in both Georgia Senate elections for the entire 2020 campaign cycle.

In fact, according to the Center for Responsive Politics, slightly more dark money — where the source of the money is not disclosed — has been spent on behalf of Ossoff’s opponent, Republican Sen. David Perdue.

The narrator in the ad, which is from the Senate Leadership Fund, says “liberal megadonors are backing Ossoff with untold millions in dark money,” while viewers see an image with the words “$1 billion in political spending.” In smaller print below the $1 billion figure, the ad cites an article in MarketWatch.

If that graphic wasn’t enough to convince viewers the ad was suggesting that $1 billion in dark money would be spent on behalf of Ossoff in the runoff election, a shorter, 15-second version of the ad draws an arrow between the $1 billion figure and Ossoff. 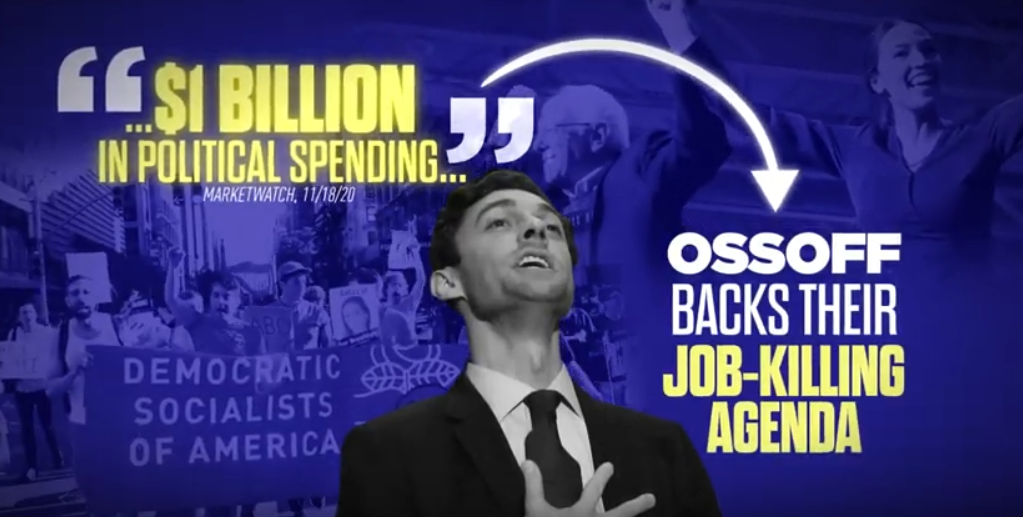 But the MarketWatch article does not speculate that $1 billion might be spent solely on behalf of Ossoff. The full headline of the story is: “Georgia’s two Senate runoff elections could spark $1 billion in political spending, analysts say.”

The other Georgia Senate race pits Republican Sen. Kelly Loeffler against Democrat Raphael Warnock. If Democrats win both Jan. 5 runoff races, they would control both houses of Congress and the presidency.

The $1 billion estimate in the story was based on comments provided by three political analysts during an interview on Atlanta radio station WABE’s “Closer Look” program on Nov. 9.

MarketWatch, Nov. 12: “All eyes are going to be on Georgia. Probably $1 billion is going to be spent by the Democratic Party here in Georgia to try and take those two seats,” a Republican analyst, Julianne Thompson, said on the program, leading host Rose Scott to sound incredulous.

But an Emory University professor of political science, Bernard Fraga, and a Democratic strategist, Fred Hicks, then indicated to Scott that Thompson’s estimate wasn’t way off.

Both parties combined could spend $1 billion in Georgia, said Fraga, describing that outlay as “really possible.” Hicks said $1 billion in total spending is “a lot of money, but there’s a lot at stake.”

Fraga clarified to us via email, “My statement that $1 billion dollars is ‘possible’ would have to include all spending to support the Democratic and Republican candidates for U.S. Senate in Georgia this year across all stages of the process (primaries, general, and general runoff), including by groups that are not coordinating with the campaigns.”

So the analysts were talking about all money being spent on the two races, and not just dark money. The article also noted that “other spending estimates for the Georgia runoffs are more modest, with a CNBC report suggesting outlays of more than $200 million.”

Other political experts have also suggested total spending in the two races could reach $1 billion. But again, that’s on behalf of all candidates in two races, and for all spending in the 2020 cycle, not just in the runoff.

An analysis of Federal Election Commission data shows that during the entire 2020 election cycle, “$2.76 million in dark money was spent in support of Ossoff or against Perdue and $2.83 million was spent in support of Perdue or against Ossoff,” Anna Massoglia, a researcher at the Center for Responsive Politics, which operates the website OpenSecrets.org, told us via email. She is responsible for researching dark money for OpenSecrets.org.

The term “dark money” refers to spending by politically active groups that do not disclose the source of their money, such as “social welfare” groups that are organized under Internal Revenue Code 501(c)(4). Although all groups must report to the FEC any spending that explicitly advocates for or against federal candidates, 501(c)(4) nonprofits are not legally required by the IRS to disclose their funding.

Most of the dark money supporting Ossoff comes from Majority Forward, a 501(c)(4) organization that is affiliated with Democratic Senate leadership, Massoglia said.

“None of this dark money spending was reported during the runoff but there is always a chance that there was additional spending on things like digital ‘issue’ ads boosting or attacking a candidate without explicitly calling for their election or defeat since those ads are generally not required to be disclosed to the FEC,” Massoglia said.

More substantial has been the tens of millions of dollars in so-called “gray money” poured into the Georgia race by super PACs that receive contributions from dark money sources.

As the Center for Responsive Politics explains, “Opaque nonprofits and shell companies may give unlimited amounts of money to super PACs. While super PACs are legally required to disclose their donors, some of these groups are effectively dark money outlets when the bulk of their funding cannot be traced back to the original donor.”

Most of that “gray money” in the Georgia Senate races is being spent by super PACs aligned with Senate leadership from both parties. And more of that gray money has been spent on Perdue’s behalf than on Ossoff’s.

Again, the Senate Leadership Fund — which was established in 2015 by allies of Senate Majority Leader Mitch McConnell — is the group responsible for the ad attacking Ossoff saying that “liberal megadonors” are backing him with “untold millions in dark money.”

“Out of $33.6 million in total grey money spending on the left, $31.2 million of that came from Senate Majority PAC, a super PAC aligned with Senate Democrats,” Massoglia added.

“Only around $5 million in grey money spending has been reported to the FEC during runoff but FEC filings are continuing to roll in,” Massoglia said. “Of the grey money spending during the runoff, a little over $250,000 has come from the left and $4.8 million from the right.”

Almost all of that gray money spending during the runoff has been by Senate Leadership Fund, she said.

As for his candidate committee, Ossoff received $17.7 million in large individual donations, accounting for about 55% of the money he raised, according to the Center for Responsive Politics.

Perdue got less from large individual donors, about $10.2 million. That accounted for 48.2% of the money Perdue raised.

And as we have written, Perdue has gotten a lot more than Ossoff from PACs during the 2020 election cycle. Ossoff has raised a total of $32.3 million, but only $322,000, or 1%, came from PACs. By comparison, Perdue received $3.3 million from PACs, which represents nearly 16% of his total contributions, including nearly $2.7 million from business PACs.

We should note that the ad also misleadingly claims that Ossoff took “money from Chinese communists and terrorist sympathizers.” We addressed that claim last month when we wrote about an earlier Senate Leadership Fund ad. As we wrote at the time, Ossoff’s TV production company received payments from a Hong Kong media company and Al Jazeera — among many others — for the rights to air investigative pieces.

Clarification, Dec. 2: This story has been updated to make clear that Massoglia, a researcher at the Center for Responsive Politics, says tens of millions of dollars in gray money — not dark money — have been spent on the Georgia Senate race.