The U.S. Department of Energy approved a request to allow power plants in snowstorm-battered Texas to temporarily bypass some environmental limits during its energy crisis, in order to produce more power. Viral headlines falsely claim the department rejected the request.

On Feb. 14, the Electric Reliability Council of Texas sent a letter to the U.S. Department of Energy requesting an emergency order to permit power plants in its market “to operate up to their maximum generation output levels,” within some limitations.

ERCOT runs the grid that serves the vast majority of Texas, and the state was facing down an energy crisis brought on by freezing temperatures and a severe winter storm — which left millions without power.

On social media, however, viral headlines and social media posts are falsely proclaiming that the department rejected the request.

The website InfoWars ran a Feb. 20 headline, “Smoking Gun! Joe Biden’s Dept. of Energy Blocked Texas from Increasing Power Ahead of Killer Storm.” That story was shared more than 8,500 times on Facebook, according to CrowdTangle analytics data.

“Biden Admin Refused Texas Governor’s Request to Run Power at Full Capacity,” reads a Feb. 22 headline on the website of a Texas-based radio show, “Walton And Johnson.” The author of the story also took to Facebook to baselessly blame Biden for the reported deaths in Texas, saying the president “let it happen.” 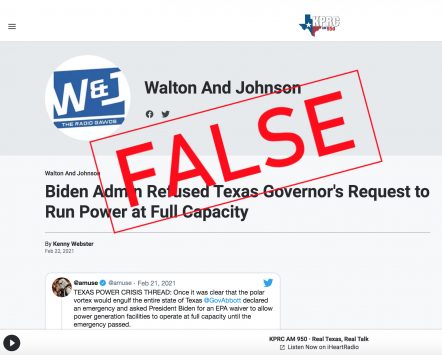 That radio show story — also shared nearly 8,000 times on Facebook before it was deleted — was premised entirely on a Twitter thread from Alexander Muse, who runs a conservative news aggregation website.

“This thread is false,” Michael Webber, a professor at the University of Texas at Austin who specializes in energy sources, told us in an email. “DoE did not hinder Texas’ response.”

As we said, the request in question came from ERCOT — not Texas Gov. Greg Abbott, as Muse and the radio show claim. (It’s worth noting that, as we reported, Biden on Feb. 14 approved Abbott’s request for an emergency declaration for Texas, thereby allowing federal funds and the Federal Emergency Management Agency to aid in the state’s response.)

The DOE’s Huizenga signed the electric emergency order late on Feb. 14, putting it into effect through Feb. 19. The order permitted power plants to temporarily exceed certain environmental restrictions in order to reach maximum output during times of energy emergency alerts by ERCOT.

In a notice, ERCOT notified market participants of the approval.

The InfoWars story and Muse’s Twitter thread also wrongly claim that it was the federal government that floated a cost of $1,500/MWh for the additional energy produced. “Biden’s EPA … instead offered to allow certain power generation facilities a waiver if they raised the prices they charged to Texans to more than $1,500/MWh resulting in massive statewide power outages and a failure of the grid,” Muse said in a tweet.

That, too, is wrong.

That figure actually originated in ERCOT’s initial request, and was then included in the DOE order. The request to DOE said that, if an electric-generating unit was unable to produce its maximum output because of an emissions restriction or “other limit in any federal environmental permit,” then the operator would be able to bypass those restrictions — but that the “incremental amount of restricted capacity would be offered at a price no lower than $1,500/MWh.”

The letter later referred to this pricing as “a separate mechanism to help ensure this capacity is deployed only when absolutely necessary.”

Webber, the professor at the University of Texas at Austin, said that cost was a “minimum price” that would ensure plants permitted to bypass environmental restrictions were not given an unfair advantage.

“Emissions controls cost money,” he said. “It would be unfair to let some power plants turn off their emissions controls, which lowers their operational costs, and then to use that lower cost to underbid other generators who responsibly left their controls in place.”

Ted Kury, director of energy studies for the Public Utility Research Center at the University of Florida, said “when wholesale prices get high, the market operator is actually hoping that this sends a signal to folks to stop using electricity.” That works for, say, large companies — but it often ends up being punitive for residential customers.

Kury told us in an email that, outside of a municipal or cooperative utility, different power supply companies compete for customers and structure charges differently.

“Some power suppliers charge customers every day based on the 24 hourly wholesale prices that day,” Kury said. “These customers are fully exposed to the wholesale market and pay those costs immediately. Those situations comprise the news stories of ‘sticker shock’ you’re reading about. Others will average these costs over longer periods of time, essentially sharing the wholesale market risk with customers.”

In other words, he said, the high cost of electricity generated during the emergency will be experienced by most Texans — though it won’t be equally transparent for all.

Muse’s Twitter thread also falsely claims that “[t]he truth is that the federal government controls how Texas generates electricity – the mix of sources and the capacity of each.”

Ari Peskoe, director of the Electricity Law Initiative at the Harvard Law School, told us in a phone interview that was wrong, too.

“If you want to build a power plant in Texas … there are environmental limits” such as rules regarding air emissions or water,” he said. But “that doesn’t dictate” the types of power generation in Texas.

Magness, Bill. Letter to the Honorable David G. Huizenga, Re: Request for Emergency Order Under Section 202(c) of the Federal Power Act. 14 Feb 2021.