One America News Network recently spotlighted one man’s analysis that wrongly suggests precinct-level voting data in Georgia proved a computer algorithm was used to swing the election to President Joe Biden. A hand tally of paper ballots confirmed the election outcome, one of many indications the claim is false.

The latest example in a string of bogus claims suggesting that the 2020 election was stolen via computer software comes from a dubious One America News Network report, which presents an analysis purportedly proving that precinct-level election results in Georgia were “impossible” without the use of an algorithm.

The video, now circulating on Facebook, highlights one person’s questionable analysis showing that former President Donald Trump got the same share of the votes across multiple precincts in Fulton County, Georgia, during specific reporting times.

But experts say the conclusion being offered in the video is bunk.

OAN’s Christina Bobb tells viewers that Edward Solomon, a “mathematician” who “took a closer look at the election results at the precinct level,” determined that “computer software must have used an algorithm to change the votes.” The algorithm was used “long enough to change the advantage,” she says.

While the conservative outlet refers to him as an “expert mathematician” — and the notoriously unreliable website the Gateway Pundit referred to him as a “Renowned Mathematician” in sharing OAN’s report — Solomon’s exact credentials aren’t clear. 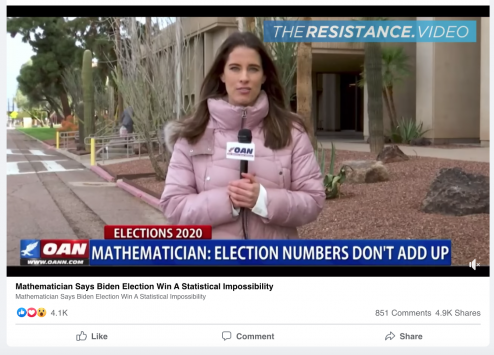 In a document on Scribd making similar allegations of fraud in Pennsylvania, he claims to “have devoted my life to the study of numbers, fractions and ratios, and have written academic materials on the subject.”

According to his social media profiles, Solomon has been associated with Stony Brook University. A university spokesperson told us that he attended classes as a math major for various terms between 2008 and 2015, but did not get a degree.

Solomon did not respond to emails or Facebook messages asking for his credentials, and where exactly he got his data.

Solomon maintains a YouTube channel where he has posted many videos purporting to prove election fraud. Among his older videos, too, are calls that he made to the radio show of conspiracy theorist Alex Jones. In one, Solomon alleged that the gunman in the fatal 2013 shooting at the Washington Navy Yard had been identified online before the shooting even took place.

As we said, we don’t know where Solomon got the data that he showed in the OAN clip. It didn’t come from Edison Research, which provides vote tabulation data to the media, the firm told us. And it doesn’t match the data available from Georgia’s Secretary of State. But even if it is an accurate snapshot of precinct-level vote entries on election night, it doesn’t prove that there was fraud committed by an algorithm, experts say.

“That several precincts would show exactly the same vote shares at different times is not at all surprising,” said Philip Stark, associate dean of the division of mathematical and physical sciences at the University of California, Berkeley. Stark also serves on the U.S. Election Assistance Commission Board of Advisors.

Noting that it was hard to fully assess Solomon’s claims because the origins of the data aren’t clear, Stark said in an email that precincts showing the same vote shares would be even more expected by incorporating multiple snapshots of time (as Solomon does). How polarized or close to evenly split an area is could also affect the chances of that occurring, he said.

For instance, Fulton County, which includes Atlanta, leans Democratic and in the OAN video Solomon cited a number of precincts that skew heavily Democratic. In our review of those precincts’ final election results, the 2020 vote shares were not markedly different from those in the 2016 presidential election. While the split was similar, Trump actually fared a little better in 2020 in many of those precincts.

In precinct 10J, for example, Hillary Clinton earned about 96% of the total vote in 2016 compared to Trump’s 3%. In 2020, President Joe Biden received 94% of the vote in that precinct while Trump received 5%.

“It seems like [Solomon] may have sifted through the early Fulton County data … and picked out entries that have the proportion ‘pattern’ [he] dreamed up, using teensy numbers that are utterly inconsequential,” Charleen Adams, a research fellow at the Harvard T.H. Chan School of Public Health who has written about the misleading use of statistics in election fraud claims, told us by email.

There are other problems with the claim, too.

In order for an algorithm to tamper with votes, he said, it would have to access both the election management system (EMS), which tabulates the votes, and the election night reporting system (ENR), which publishes the results.

The EMS is not connected to the internet, Sterling said. So there would be no way for a computer running a nefarious algorithm to reach it.

Ryan Macias, former acting director of the U.S. Election Assistance Commission’s Voting System Testing and Certification Program, also pointed out in a phone interview that Georgia’s audit — which included a hand tally of the paper ballots — and recount further disprove the claim that an algorithm was used to steal the election for Biden. The counts ultimately confirmed the originally reported election outcome.

“That is the verification that the system is correct,” Macias said.

Stark agreed that the audit undermined the theory of an algorithm manipulating the votes. He was one of dozens of experts who signed a letter in November saying that there was no substantial evidence put forward to support the allegation that the 2020 election had been rigged.

That said, Stark said he and other experts do have actual security concerns, and election systems — including in Georgia — can be improved to engender more confidence in the process. (For example, he advocates that hand-marked ballots be used in place of the touchscreen tablets, or ballot-marking devices, that print out a voter’s selection on a paper with a barcode that is then scanned for counting. Ballot-marking devices should be reserved for voters who need that assistance, he contends.)

However, those concerns are not unique to the 2020 election, he said, and they are not the same as baseless claims that algorithms were used to commit massive, wide-scale fraud.

Adams, Tony, et. al. “Scientists say no credible evidence of computer fraud in the 2020 election outcome, but policymakers must work with experts to improve confidence.” 16 Nov 2020.