When President Joe Biden announced plans to reduce U.S. greenhouse gas emissions by 50% by the end of the decade, he provided a few examples, but no detailed plan, about how that would be achieved.

Nonetheless, speculation by a British tabloid that it could include reducing beef consumption led to a wave of sarcastic outrage from Republican officials and conservative media.

“Joe Biden’s climate plan includes cutting 90% of red meat from our diets by 2030,” freshman Republican Rep. Lauren Boebert tweeted. “They want to limit us to about four pounds a year. Why doesn’t Joe stay out of my kitchen?”

Agriculture Secretary Tom Vilsack on April 26 categorically denied that there is any plan by the administration to reduce beef consumption.

But let’s deconstruct how this bogus talking point emerged.

As we said, during opening session remarks at the Virtual Leaders Summit on Climate on April 22, Biden pitched some of the components in his American Jobs Plan that he said puts the United States “on the road to cut greenhouse gases in half — in half by the end of this decade.” That’s compared with 2005 emissions levels.

Biden talked about “critical infrastructure to produce and deploy clean technology” and “line workers laying thousands of miles of transmission lines for a clean, modern, resilient grid.” He talked about “capping hundreds of thousands of abandoned oil and gas wells that need to be cleaned up, and abandoned coalmines that need to be reclaimed, putting a stop to the methane leaks and protecting the health of our communities.”

He discussed a vision for “autoworkers building the next generation of electric vehicles, and electricians installing nationwide for 500,000 charging stations along our highways” and “engineers and the construction workers building new carbon capture and green hydrogen plants to forge cleaner steel and cement and produce clean power.”

And, he said, “I see farmers deploying cutting-edge tools to make soil of our … heartland the next frontier in carbon innovation.”

No mention of beef or cattle ranching, which does account for some greenhouse gas emissions.

The speculation about beef reduction came from a story in the Daily Mail, which ran under the headline, “How Biden’s climate plan could limit you to eat just one burger a MONTH, cost $3.5K a year per person in taxes, force you to spend $55K on an electric car and ‘crush’ American jobs.”

Working off Biden’s stated goal of cutting greenhouse gas emissions by 50%, the article states, “Here’s how it could affect every day Americans.”

Daily Mail, April 22: Americans may have to cut their red meat consumption by a whopping 90 percent and cut their consumption of other animal based foods in half.

Gradually making those changes by 2030 could see diet-related greenhouse gas emissions reduced by 50 percent, according to a study by Michigan University’s Center for Sustainable Systems.

To do that, it would require Americans to only consume about four pounds of red meat per year, or 0.18 ounces per day.

It equates to consuming roughly one average sized burger per month.

The University of Michigan study cited in the article considered diet scenarios that would reduce greenhouse gas emissions, including one scenario in which 90% of beef consumed in the U.S. were replaced with plant-based alternatives. But again, nothing in Biden’s stated plans mentions anything about reducing beef consumption.

Two of the authors of the January 2020 study, Gregory A. Keoleian and Martin C. Heller, told Yahoo News that “to our knowledge, there is no connection between our study and Joe Biden’s Climate plan.”

“This appears to be an association made erroneously by the Daily Mail that has been picked up widely,” they said. “Our study merely identifies opportunities for emissions reductions that are possible from changes in our diet. By no means does it suggest that these changes in diet would be required to meet climate goals.”

Nonetheless, the article fueled a torrent of conservative pushback.

“Speaking of stupid, there’s a study coming out of the University of Michigan which says that to meet the Biden Green New Deal targets, America has to, get this, America has to stop eating meat, stop eating poultry, fish, seafood, eggs, dairy and animal-based fats,” Larry Kudlow, a former adviser to then-President Donald Trump, said on his Fox Business show on April 24. “OK, you got that? No burgers on July 4. No steaks on the barbie. I’m sure Middle America is just going to love that.” 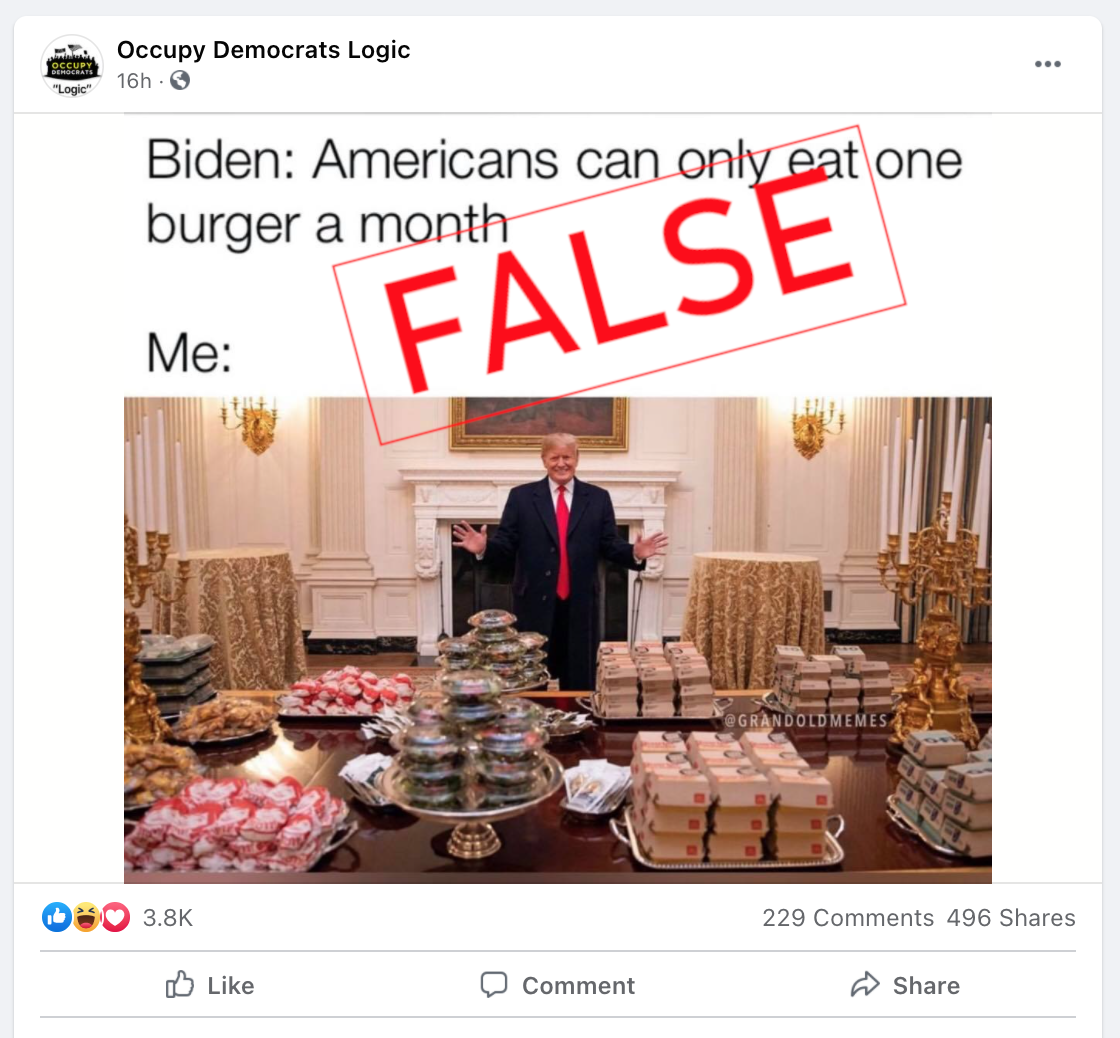 Texas Gov. Greg Abbott tweeted a Fox News graphic that claimed: “Biden’s climate requirements” would “Cut 90% of red meat from diet; Max 4 lbs per year; One burger per month.” Abbott commented, “Not gonna happen in Texas!” (Fox News has since acknowledged, “A graphic and a script incorrectly implied that it was part of Biden’s plan for dealing with climate change. That is not the case.”)

In addition to Boebert’s false tweet, Rep. Marjorie Taylor Greene likened Biden to the “Hamburglar” and tweeted a picture of Biden sitting at a dining table with a hamburger, with the caption, “No burgers for thee, but just for me.”

“It was a joke,” Greene’s communications director, Nick Dyer, told us via email.

Asked about the fake controversy during a virtual briefing hosted by the North American Agricultural Journalists on April 26, Agriculture Secretary Tom Vilsack said, “It’s hard to answer a question that assumes that the president has a position that he doesn’t have.”

“There is no effort designed to limit people’s intake of beef coming out of President Biden’s White House or coming out of the USDA,” Vilsack said. “Sometimes, folks, in the political world, games get played and issues are injected into the conversation knowing full well that there’s not a factual basis for the issue. But also knowing that somebody’s gonna pick it up and somebody’s gonna ask about it, and it all of a sudden becomes an issue. And this is, I think, a good example of this.”

“There was no desire, no effort, no press release, no policy paper — none of that — that would support the notion that the Biden administration is going to suggest that people eat less meat, or that USDA has some program that’s designed to reduce meat consumption,” Vilsack said. “Just simply not the case.”

Although not in Biden’s stated plan, it is true that livestock operations, particularly cattle farming, contribute a significant amount to greenhouse gas emissions.

“There are a number in the medical field who are suggesting proper balance,” Vilsack said. But, he said, “at this point in time,” the Biden administration is not making such a proposal.