Ads on the social media platform featuring the faces of various Fox News figures have taken users to false headlines, topping deceptive full-page “stories,” such as:

But, as we said, the headlines are bunk, and are actually ads that wrongly associate the network’s figures with various cannabidiol, or CBD, products and, in one case, a male enhancement drug. Facebook does not permit advertisers to promote such CBD products.

We reached out to Facebook about the ads, and a spokesperson told us that the “ads violate our policies and we have removed them.”

“We put significant resources towards tackling ads that promote deceptive behavior, like misusing images of public figures to mislead people, but we do miss some,” the spokesperson said. “Our systems get better when people report this kind of behavior in ads, by tapping the three dots in the top right corner and selecting ‘Report Ad.'”

After our inquiry, we found that another such ad on Facebook involving Laura Ingraham, published in July, remains active — underscoring the platform’s struggle to identify and block all such deceptions. Update, Aug. 20: Facebook has since removed that ad, too, and said it removed the user and business account responsible for violating its policies. (Full disclosure: FactCheck.org works with Facebook as a third-party fact-checking partner; the platform plays no role in our editorial decisions.)

The bogus stories represent an ongoing trend. We previously reported on another such false “Fox News” story that claimed the evangelical leader Charles Stanley was selling a line of CBD gummies. Other fact-checkers have debunked similar claims about contestants from ABC’s “Shark Tank” selling CBD products. 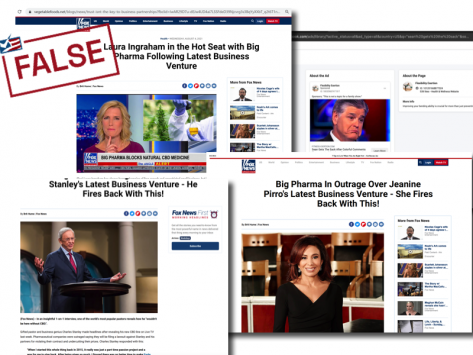 The use of bogus stories to misleadingly market products isn’t a new tactic. In late 2020, the professional skateboarder Tony Hawk told his social media followers to avoid a headline claiming that “Big Pharma In Outrage” over Hawk’s CBD product (he had no affiliation with the company referenced) — the same claim made in the headline about Pirro and Stanley. HGTV star Bryan Baeumler did the same.

In the latest blitz, the deceptive stories were surfaced to Facebook users through ads that vaguely suggested the Fox News stars were on the outs with the network. Once users clicked on an ad, they were taken to dubious websites where the full-page ads were made to look like Fox stories — with barely noticeable fine print at the bottom indicating they were ads — that masked what would otherwise appear to be benign blog posts.

For instance, one Facebook ad displayed the headline, “Laura Dismissed From ‘The Ingraham Angle,'” with a photo of Laura Ingraham. The ad linked to a post on vegetablefoods.net headlined, “Trust Isn’t the Key to Business Partnerships.”

But visiting the page from the Facebook ad surfaced a bogus story slickly designed to appear as if it were from Fox News — under the byline of (actual) Fox reporter Brit Hume — with the headline, “Laura Ingraham in the Hot Seat with Big Pharma Following Latest Business Venture.” It falsely tied Ingraham to a product called “Prime Nature CBD.”

Nick Nikiforakis, an associate professor of computer science at Stony Brook University, said in a phone interview that such “cloaking” of a webpage can make it harder for analysts and researchers to identify scams.

For example, those setting up such a ruse may only show the full-page ad to people visiting the link from a certain source, he said, or only display the ad to the same person once.

And users who saw the supposed Fox News stories without taking note of the domain could well have been tricked into thinking the stories were from the network — given their use of the network’s logo and color scheme — he said.

We reached out to Fox News about the deceptive ads leveraging the network’s brand, but didn’t hear back.

The vegetablefoods.net domain and others used to push the false stories have been registered in recent months through a service that masks the identities of those truly behind the websites, according to registration records on WhoIs.com. The website catanimals.online was used to show Facebook users the bogus Pirro story, while creativitypaintings.com surfaced a bogus story — purporting to be from GQ magazine — connecting Sean Hannity to a male enhancement drug and suggesting he and the network were “cutting ties.”

Public complaints to the Better Business Bureau for various CBD products are in no short supply. Some cite misrepresentations of products being tied to Fox News anchor Tucker Carlson; many specifically cite content they encountered through Facebook, such as ads using Stanley.

There are a number of complaints and negative reviews listed with the bureau regarding Eagle Hemp, the company marketed in the bogus story about Stanley.

Similarly, a Freedom of Information Act request we filed with the Federal Trade Commission revealed that at least three complaints have been lodged against Eagle Hemp this year.

“Eagle Hemp CBD placed an ad in Facebook stating its affiliation with and ownership by Dr. Charles Stanley of In Touch Ministries. I trusted its statements foolishly and made a credit card purchase,” one of the complaints said.

The company — which received a federal Paycheck Protection Program loan in 2020 — is actually managed by George Southworth, a Florida businessman, who didn’t respond to our requests for comment. The company’s primary address is the same as another company registered to Southworth called Well Being Labs. Both share the address of Southworth’s concrete business.

“I’ve talked to victims who say the use of the celebrity is really important,” C. Steven Baker, an international investigations specialist with the Better Business Bureau who has researched such campaigns, told us in a phone interview. “If there’s a celebrity they believe in or trust, that gives them a lot more confidence” in the product — because, the customers figure, the celebrity wouldn’t endorse an illegitimate company.

In a 2018 report, Baker — who spent more than 30 years with the FTC — laid out how bogus stories and celebrity endorsements, often peddled by “affiliate” marketing sites, are used to entice customers into deceptive free-trial offers and “subscription traps.”

Baker told us that identifying the individuals behind such campaigns can be tricky, since those selling the product may use fulfillment centers and third-party customer service lines.

The most recent fictitious, Fox News-themed stories touted products such as Prime Nature CBD and Green Country CBD. The pages linked in the bogus stories to buy those CBD brands listed the same P.O. Box in Tampa, Florida; we were unable to locate business records for either.

Hawk, Tony (@tonyhawk). “To anyone seeing this nonsense on their feed: it is FAKE. I’ve never even heard of this company but their landing page is all lies and fabrications… compete with a ‘testimonial’ about ‘my’ product from Tom Hanks. So… please don’t click or fall into their scam. I’m sorry for the interruption but I guess this means I’ve made it…?” Instagram. 3 Dec 2020.