Hunter Biden served on the board of the Ukrainian oil and gas company Burisma Holdings from 2014 to 2019. But Ted Nugent posted a Facebook meme falsely insinuating that Hunter’s payments from the company ended with the Russian invasion of Ukraine.

In May 2014, Hunter Biden — the son of then-Vice President Joe Biden — became a board member of Burisma Holdings Ltd., one of the biggest private oil and gas companies in Ukraine.

The hiring led to scrutiny in the media, including an Associated Press article that called Hunter’s hiring “politically awkward” because the Obama administration was looking to “influence the policies of Ukraine’s new government, especially on energy issues.”

During the 2020 presidential campaign, then-President Donald Trump repeatedly twisted the facts surrounding Hunter’s work with the gas company, falsely claiming that Joe Biden pressured Ukraine to fire a prosecutor who “was after his son,” Hunter, and “was prosecuting” him.

As we wrote several times, Mykola Zlochevsky, Burisma’s founder, was the subject of a series of criminal investigations, but there was no evidence that Hunter was ever under investigation or that Joe Biden pressured the Ukraine government on his son’s behalf.

Hunter Biden resigned from the company in April 2019, while his father was running for president.

The war in Ukraine sparked by the invasion by Russian forces has brought Hunter’s work with Burisma back into the limelight.

Ted Nugent — a rock star and conservative activist who frequently spreads misinformation online — posted a Facebook meme on Feb. 25, which drew 10,000 likes and more than 8,000 shares, showing an image of Hunter Biden with the words, “I GUESS THOSE UKRAINE CHECKS GONNA STOP.”

Other Facebook users posted comments showing support of Nugent’s post, such as, “Poor hunter. Where’s he going to get the cash he needs for drugs, strippers and hookers.” Another said, “This is probably the ONLY reason that Biden is doing anything to help Ukraine.” 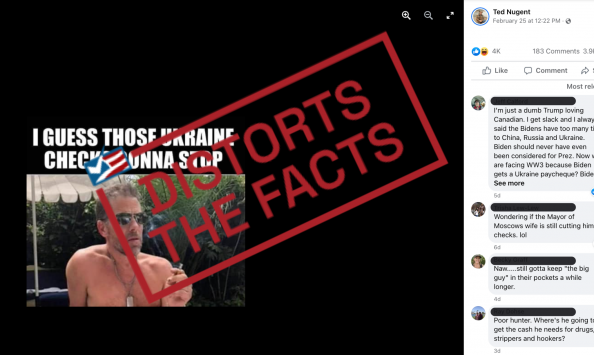 But as we say above, Hunter left the Burisma board back in 2019 — almost three years before the war in Ukraine began.

Baker, Luke, et al. “What Hunter Biden did on the board of Ukrainian energy company Burisma.” Reuters. 18 Oct 2019.