Several megachurches in the U.S. are actively raising funds to support Ukrainians in light of the Russian invasion. But social media posts have falsely claimed that “we haven’t seen a single American mega church offer anything to the Ukrainians.”

On Feb. 24, Russian President Vladimir Putin launched an invasion of Ukraine, which has included the bombing of Ukrainian cities and the displacement of their populations.

More than 2.1 million Ukrainians — mostly women, children and the elderly — have fled the Russian onslaught, and the number of refugees is expected to grow to 4 million, according to the U.N. Refugee Agency.

American religious organizations and megachurches have responded by collecting donations to support relief efforts for the Ukrainian people.

But The Other 98%, a Democratic Facebook page, posted a meme on March 5 claiming megachurches in the U.S. aren’t providing any aid to the people of Ukraine.

The Hartford Institute for Religion Research defines a megachurch as a large, active Protestant congregation with an average of 2,000 or more weekly attendees and a multitude of outreach programs and ministries.

The Other 98% Facebook post, which received 40,000 likes and 22,000 shares, showed an image of the Lakewood Church in Houston, Texas, with the text, “Funny how we haven’t seen a single American mega church offer ANYTHING to the Ukrainians.”

But the claim is false, and the organization has since corrected the post — though the original text remains under the image. 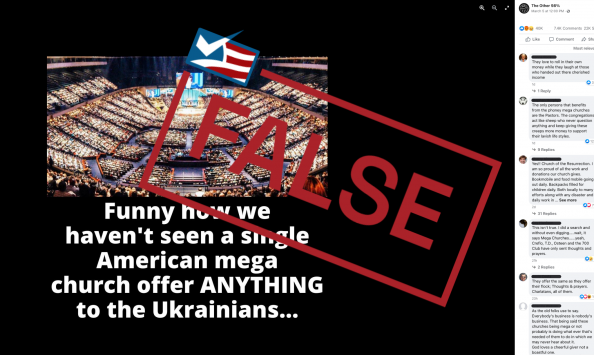 Lakewood Church, the megachurch in Houston led by Joel Osteen, with a weekly attendance of 45,000, says it is conducting global efforts to provide support to Ukraine.

Two days after The Other 98% posted the original meme, Lakewood Church posted a video on its Facebook page that features Dr. Paul Osteen, Joel Osteen’s brother, and infectious disease specialist Dr. Todd Price. They say that, through a longstanding partnership, the Lakewood Church has been doing work in Ukraine for 26 years.

The video says that through donations coordinated by John Osteen, Paul and Joel’s father, in 1996, a church was built in Ukraine that is now working to feed refugees affected by the war.

“With our partnership with Dr. Todd & Sue Price, we are working inside Ukraine to help those who are in the midst of the conflict right now,” reads the church’s Facebook post.

By March 9, The Other 98% had updated the caption that accompanies its Facebook post, noting that Osteen’s church says it is indeed working to provide support to the people of Ukraine.

“This post has been fact checked and found to be False,” reads the new caption. “‘The church pictured in the Facebook post is Lakewood Church in Houston. It’s one of America’s largest megachurches with approximately 45,000 people attending services and activities every week.”

But other social media accounts have repeated the claim or shared the original meme without the updated information.

For instance, a post on Twitter shared the meme and received more than 3,000 likes and 900 retweets — but it has no correction.

As we’ve said above, American megachurches are actively raising funds to support Ukrainians.

Saddleback Church, a megachurch based in California that has a weekly attendance of 23,494, has set up a relief fund that “works through local churches to meet urgent needs and serve those devastated by tragedy, whether locally or globally.” The church says it is now “focusing efforts on churches in Ukraine and the tornado devastated Midwest states of Arkansas to Kentucky.”

In partnership with Operation Mobilization, a Christian missionary organization, Southeast Christian Church, a Kentucky-based megachurch with a weekly attendance of 21,764, is taking donations to provide support to Ukraine.

Gateway Church, a megachurch in Texas with an attendance of 100,000, has also set up a crisis relief fund to support people in Ukraine and the surrounding region.

Catholic News Service. “Where to give to help Ukraine.” America: The Jesuit Review. 25 Feb 2022.