President Joe Biden signed a $1.5 trillion bill that funds the federal government and provides assistance to Ukraine. Social media posts misrepresent the bill by implying Congress members gave themselves a 21% pay raise. The bill increases House office budgets by 21%, which likely will result in pay raises for staffers — but not for members of Congress.

President Joe Biden signed a $1.5 trillion spending bill on March 15 that funds the federal government through Sept. 30 and provides $13.6 billion in humanitarian and security assistance in response to Russia’s invasion of Ukraine.

The bill — which passed in Congress with bipartisan support — also includes $774.4 million for the Members’ Representational Allowance, or MRA, which funds the office budgets for House lawmakers, including their staffers’ salaries. That’s a $134.4 million, or 21%, boost over the previous fiscal year and the largest increase in the MRA appropriation since it was authorized in 1996, according to a bill summary by the House Appropriations Committee. The bill also provides $7 million for Senate intern pay, an increase of $1 million from fiscal year 2021. An average of $70,000 will be provided to each senator’s office for the sole purpose of compensating interns.

The day after the bill received final congressional approval, The Washington Standard posted an article with the headline, “Congress Just Gave Itself A 21% Raise As Americans Can’t Afford Gas.”

The article said that the $1.5 trillion bill has “plenty of inflationary spending,” and that “honorable members of the legislature didn’t leave themselves out.”

In the same article, The Washington Standard explained that the bill does not include a pay raise for members of Congress. “It’s not technically a pay hike for congressmembers, but, in particular House members, are notorious for putting family members on the payroll. And for using staffers to run their errands and handle assorted personal projects for them,” the article says.

But claims about “a 21% pay raise” spread on social media without explaining that the increase was not for the salaries of Congress members, but rather for House office budgets.

Carlton Higbie, a host at Newsmax and former chief of external affairs for the Corporation for National and Community Service, shared a link to The Washington Standard article three days after it was published.

“Everything sucks under @JoeBiden unless you are in congress. In that case you just gave yourself a 21% raise… unreal,” reads the tweet from Higbie, shared in a screenshot on his Instagram account.

Benny Johnson, a conservative commentator and the chief creative officer at the conservative organization Turning Point USA, posted a video on Facebook with the title, “OUTRAGE: Congress Gives Themselves a 21% RAISE as Americans CRUSHED by Inflation are Now STEALING Gas.” 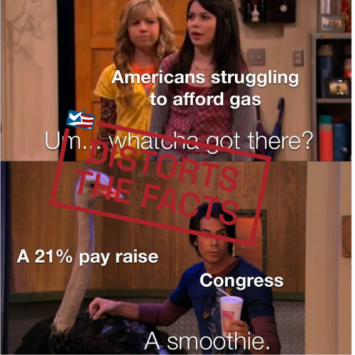 One Facebook user commented on Johnson’s post by incorrectly saying, “We should be the ones to vote on whether they get a raise or not. They have no right to vote their own raises. Who else can vote their own pay raise!!!”

A conservative account on Instagram shared a similar message by posting a meme suggesting Congress members gave themselves “a 21% pay raise.”

“​​Nice to see y’all are walking in tall cotton on the taxpayer’s dime while the rest of us are left trying to keep our heads above the water,” reads the caption of the post.

But, as we said above, the increase is for the House office budgets and is likely to result in a pay raise for House staffers, not members of Congress.

On Aug. 12, House Speaker Nancy Pelosi announced that some House staffers’ salaries could exceed those of lawmakers. In a letter to colleagues, Pelosi said she raised the maximum staff salary to $199,300.

Except for those in leadership roles, members in the House and Senate receive an annual salary of $174,000 — an amount that hasn’t changed since January 2009.

Congressional pay is set by a formula, and members of Congress have voted against accepting a pay raise since 2010.

Higbie, Carl (@CarlHigbie). “Everything sucks under ⁦@JoeBiden⁩… unless you are in congress. In that case you just gave yourself a 21% raise… unreal.” 14 Mar 2022.