When it comes to political images, seeing shouldn’t always be believing. Case in point is an image recently tweeted by Georgia Gov. Brian Kemp that is misleadingly presented to make his polling advantage over Republican rival David Perdue appear larger than it actually is in a hypothetical general election matchup with Democratic candidate Stacey Abrams.

According to a recent poll from Emerson College/The Hill, Kemp leads former U.S. Sen. Perdue in the Republican gubernatorial primary race by 11 percentage points, 43% to 32%, with 17% still undecided.

In a tweet on April 7, Kemp used that same poll to try to make the case that he is also a much safer bet than Perdue to beat Abrams in a general election matchup.

Poll after poll shows our campaign is the STRONGEST against Stacey Abrams this fall. Let's keep up the momentum and keep Georgia red! pic.twitter.com/F40pS4ZcLN

In his tweet, Kemp cites this poll as evidence that “our campaign is the STRONGEST against Stacey Abrams this fall.”

As we said, the poll indicates Kemp would beat Abrams by 2 percentage points more than Perdue would. But look at the side-by-side graphics in the tweet. To the eye, it would appear the difference in performance against Abrams is more substantial that it actually is.

Jacob Rubashkin, a reporter and analyst for Inside Elections, tweeted an image that shows how the scale of the side-by-side bar charts distorts the actual size of the lead Kemp enjoys.

Here’s what a to-scale representation of that poll should look like: 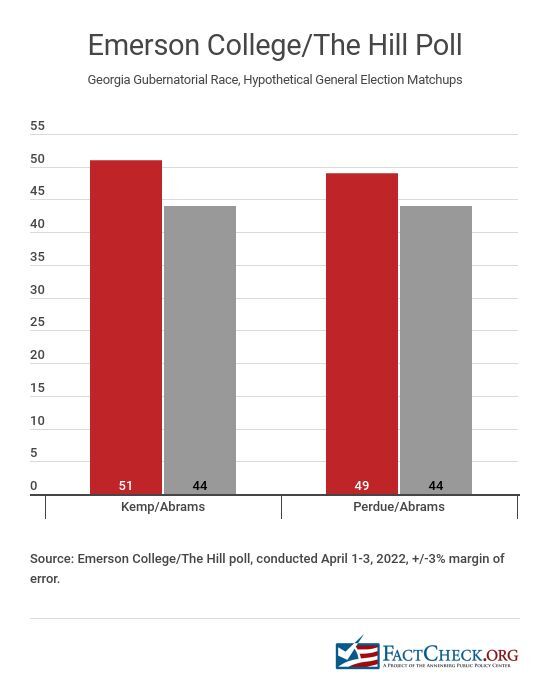 Kemp’s lead over Abrams, compared with Perdue’s, is even less impressive when factoring in the poll’s margin of error of plus or minus 3 percentage points.

“The margin of error allows you to predict with 95% certainty just how much the population will support each candidate,” Patricia Moy, a political communication scholar at the University of Washington, told us via email. “Given the figures represented in the image, you can be 95% confident that: 41-47% of registered voters in Georgia will support Abrams; 46-52% will support Perdue; and 48-54% will support Kemp.”

“The overlap makes it impossible to say who is stronger,” said Moy, who is president of the American Association for Public Opinion Research. “Numerically, the difference between Kemp and Perdue could be as much as a 4% lead for Perdue (high end, 52%, for him, vs. 48% for Kemp) or 8% lead for Kemp (54% Kemp, 46% Perdue).”

More troubling, she said, is “the visual misrepresentation of how the 44% Abrams bar is depicted closer to 30%” against Kemp.

Just a reminder to our readers, when it comes to political advertising, don’t always believe what your eyes are telling you.