A Mississippi-based nonprofit has sent shipments of baby formula to Ukraine since Russia invaded the country. A social media post misleadingly suggests the shipments are responsible for the formula shortage in the U.S. But the shortage has been due to supply chain problems, a product recall and the temporary closure of a manufacturing plant.

The infant formula shortage in the U.S. has spawned a series of false claims aimed largely at telegraphing a message that President Joe Biden is responsible for the shortage.

But as we have reported, the shortage is due to ongoing supply chain issues related to the pandemic, exacerbated by the closure of one of two plants operated by Abbott Nutrition, the nation’s largest formula maker with 43% of the market share.

The shutdown of the Michigan plant three months ago and a related voluntary recall came after four infants became ill with cronobacter, a bacterial infection, between September and January and two of them died. Abbott says there is no conclusive evidence to show formula from the plant caused the illnesses.

While the plant remains closed, the Food and Drug Administration has been working with the handful of other U.S. manufacturers to step up production and has issued a new policy easing imports of formula from foreign manufacturers.

The Abbott plant could reopen in two weeks, but the company says it could take six to eight weeks for formula to reach the public.

Against this backdrop, a social media post that has received widespread attention misleadingly suggests the shortage is related to relief shipments sent to Ukraine from the U.S. 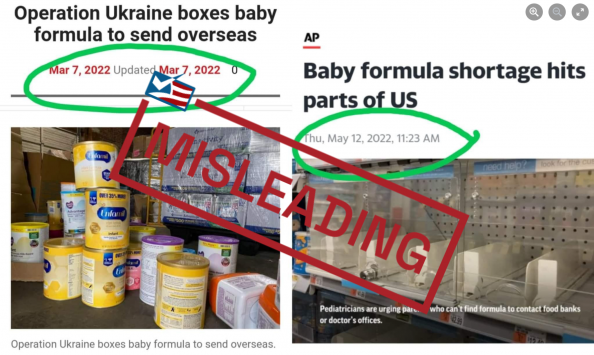 Operation Ukraine is a nonprofit organization based in Columbus, Mississippi, founded 22 years ago by Kathy Cadden.

Cadden said that since the social media post appeared, she has received threats from people who told her she was “working for Satan” and “killing American babies.”

“I didn’t create the problem,” Cadden told FactCheck.org in a phone interview on May 18.

Cadden said she founded her organization after her cousin, a Christian missionary, told her of the conditions in orphanages in Ukraine in the years after the breakup of the Soviet Union.

“She saw how bad it was and wrote home asking for clothing,” Cadden said. “I started sending 25-pound boxes that cost $24.35 a box.”

She said that since the Ukraine war began, her organization has sent enough baby formula to provide 60,000 four-ounce servings.

According to healthychildren.org, formula-fed infants more than a month old consume about 32 ounces per day, which means Operation Ukraine’s shipments could feed about 7,500 month-old infants for one day or 1,070 for a week.

Cadden said she has suspended collecting baby formula due to the shortage in the U.S. The last shipment to Ukraine was sent on May 7.

People who donated the formula typically ordered it through Amazon or Walmart and had it shipped to her group, Cadden said. She told donors who bought it from stores not to purchase any if supplies were limited.

On April 27, Cadden posted a photo on her Facebook page showing a table full of baby formula collected at a school in Memphis, Tennessee, where her sister works.

Since her initial foray into Ukraine, Cadden said her group has provided relief supplies to a number of other countries, including other former Soviet republics, Haiti and Central American nations.

Food and Drug Administration. “FDA Encourages Importation of Safe Infant Formula and Other Flexibilities to Further Increase Availability.” 16 May 2022.

Healthychildren.org. “Amount and Schedule of Baby Formula Feedings.” Accessed 19 May 2022.

Macaluso, Nora. “Gates’ Investment in Startup Firm Is Not Related to Baby Formula Shortage.” 18 May 2022.