On Aug. 5, former President Donald Trump held a “Save America” rally at the Waukesha County Fair grounds in Wisconsin to campaign for Tim Michels, a Republican candidate for Wisconsin governor, and others.

Posts on social media are sharing a photo online to claim that the recent rally held in Wisconsin drew a “massive” crowd. But the image shared in the posts is not from the recent Trump rally.

The photo shows a large group of people standing outside, many wearing red hats. Some people were sitting in stands with American flags on top. In the corner of the image, there are screens that read, “THE BEST IS YET TO COME” — a Trump campaign theme in 2020. 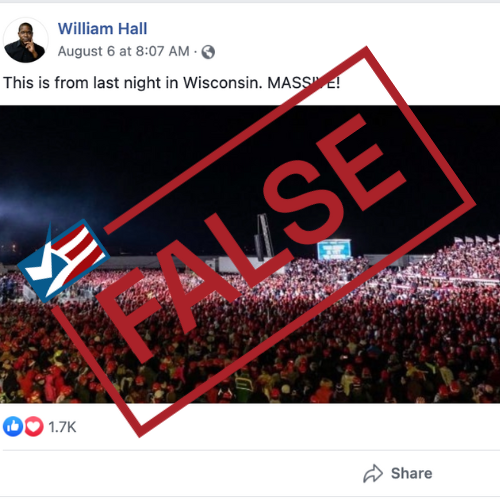 A Facebook post shared the photo with the caption, “This is from last night in Wisconsin. MASSIVE!” The post received more than 1.7 thousand likes and 1.6 thousand shares.

Waynedupree.com, a website run by conservative political commentator Wayne Dupree, shared an article with the headline, “No, This Isn’t a Photo From a 2016 Trump Rally … It’s From LAST NIGHT in Wisconsin.”

By doing a reverse image search, we found that Donald Trump’s middle son, Eric Trump, tweeted the photo on Nov. 16, 2020. He used the image to falsely claim that the turnout at his father’s campaign rallies was proof that the 2020 presidential election was “rigged.”

Eric Trump’s tweet and the photo were featured in several news articles in 2020.

Dan Scavino, a former White House communications aide, first tweeted the photo on Nov. 2, 2020 — the day before the election — with the caption, “WHAT A NIGHT IN WISCONSIN! Get out and VOTE #MAGA tomorrow!”

The photo was taken at the Kenosha Regional Airport in Kenosha, Wisconsin.

As we said above, the photo shared in the social media posts shows individuals standing and some sitting in stands in a fairly large outdoor area.

The location of the Trump rally held in Wisconsin on Aug. 5 had several key distinctions — including stands with “Save America” signs, “Save America” signs in several other places and the fair’s white tent in the background. None of those elements is pictured in the image shared with the recent social media claims and photos taken by media outlets during the 2020 rally.

Save America is the name of a political action committee created by Trump after the 2020 election.