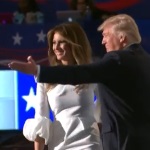 Q: Did the White House website feature a “QVC ad” for jewelry sold by Melania Trump?
A: No. The first lady’s biography page initially said that her jewelry line was sold on QVC. However, that reference has since been removed.

The vice presidential candidates got their one chance to debate, and it was a fact-checking bonanza.

We give a rundown of repeated claims in our “Groundhog Friday” feature. This week’s edition includes claims on jobs, Iran, the trade deficit and income inequality.