Trump’s and Miller’s Attacks on ‘The Squad’ 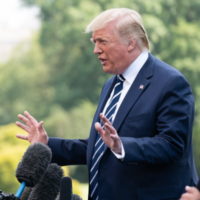 President Donald Trump and his top immigration adviser continue to criticize four progressive Democratic congresswomen known as “the squad,” but some of their claims twist the women’s words.

GOP presidential candidates Michele Bachmann and Mitt Romney claim that the U.S. ambassador to Belgium “justified” and “downplayed” anti-Semitism and blamed it on “Israel’s actions toward the Palestinians.” We find that to be a one-sided interpretation of what was actually said.
Others may view Ambassador Howard Gutman’s remarks differently than the Republican candidates when seen in full context. Gutman — who is Jewish and whose father survived the Holocaust — said, for example, that the “hatred”