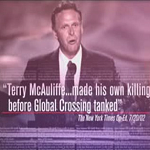 Sen. Boxer and the ‘Three-Inch Smelt’

The U.S. Chamber of Commerce is attacking Democratic Sen. Barbara Boxer of California in two ads accusing her of favoring a "three-inch smelt," a freshwater fish, over water and jobs. The ads aren’t quite accurate, however.

According to The Associated Press, the ads began running Sept. 8 in Sacramento, Fresno, Bakersfield and San Diego. Both ads say "Boxer is famous for protecting the three-inch smelt" and accuse her of voting to "cut water" to San Diego and the Central Valley.

Committee for Truth in Politics

Conservative-leaning group represented by a lawyer in the Citizens United case.

Soft on Crime in Georgia?

As Georgians count the days until the Senate run-off election Dec. 2, the ad wars rage on. The National Republican Senatorial Committee and Freedom’s Watch attack Democratic challenger Jim Martin as soft on crime, citing carefully chosen votes from his days as a state representative. But neither group is telling the whole story

Are Candidates Swearing Off ‘Attack Ads?’ Maybe This Reform is Working.

Where are all the nasty, personal, negative TV spots?