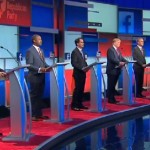 The candidates made misleading claims on banking, jobs, education and more.

Does the financial regulatory bill put an end to taxpayer-funded bailouts? Or does it "institutionalize" them? Viewers of the Sunday political talk shows and recent C-SPAN clips from the Senate floor might well be wondering, as Democrats (the "end of bailouts" crowd) and some Republicans (the "institutionalize" camp) have made these contradictory claims.
No piece of legislation can guarantee that a future Congress won’t allow the federal government to prop up a failing financial institution. But claims that this bill makes taxpayer-funded bailouts a permanent fixture are misleading,

A third-party group, the Committee for Truth in Politics, is out with an ad blasting the House’s "Wall Street Reform and Consumer Protection Act." The group, which has no Web site and has made no disclosures to the Federal Election Commission, was created by a North Carolina GOP operative, according to National Public Radio, and is represented by lawyer James Bopp, who sued the FEC on the grounds that the group shouldn’t have to file any kind of spending report to that agency.