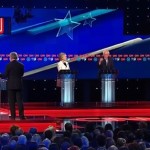 Clinton and Sanders sparred over the minimum wage, campaign contributions, guns and more.

A pro-Obama TV ad says that “big oil” pledged $200 million to help Mitt Romney, making him the industry’s “$200 million man.” But that’s a pretty slippery claim. The fact is that there is no evidence that truly big oil companies like BP, Exxon Mobil Corp. and Chevron Corp. are behind the money in question. Rather, it’s a funding goal of the Koch brothers, the libertarian billionaires whose diversified corporation has fingers in lumber, commodity trading,

A direct-mail piece sent to voters by the Clinton campaign twists Obama’s words and gives a false picture of his proposals: It says he “wants to raise Social Security taxes by a trillion dollars,” a big distortion. Obama has said a “good option” would be to apply Social Security payroll taxes to incomes over $97,500 a year, but that would only affect taxes paid by 6.5 percent of individuals and couples. And he hasn’t formally proposed such a move anyway.

Q: Can people who cast their ballots in early voting change their vote?

A: In most states, no. By our count, there are eight states that specifically allow for early voters to change their votes.