Rubio, Cruz on Reagan and Hostages 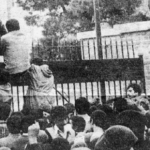 Sens. Rubio and Cruz have implied that Iran released U.S. hostages in 1981 on the day Ronald Reagan was inaugurated because Reagan ushered in a new foreign policy. But several experts on the crisis told us the timing was a final insult to President Jimmy Carter, whom the hostage-takers despised.