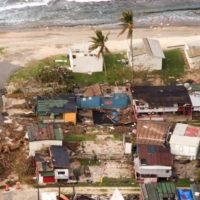 President Donald Trump claims that “Puerto Rico got 91 Billion Dollars for the hurricane” and that it received “more money than has ever been gotten for a hurricane before.” Neither of those statements is true.

Wrong Numbers on a Tin Roof

During his last press conference with White House reporters yesterday, President Bush defended his administration’s response to Hurricane Katrina, saying, “don’t tell me the federal response was slow when there was 30,000 people pulled off roofs right after the storm passed.” He even repeated the statistic three times.
The performance of the Coast Guard in response to the natural disaster has been commended by many, but that statistic is a bit inflated, according to the Guard’s own records.

Summary
McCain was asked by a New Orleans reporter why he voted twice against an independent commission to investigate the government’s failings before and after Hurricane Katrina, and he incorrectly stated that he had "voted for every investigation."

McCain actually voted twice, in 2005 and 2006, to defeat a Democratic amendment that would have set up an independent commission along the lines of the 9/11 Commission. At the time of the second vote,

Katrina: What Happened When

It will take months to get the full story, but meanwhile here are some of the key facts about what happened and when officials acted.

Is Bush to Blame for New Orleans Flooding?

He did slash funding for levee projects. But the Army Corps of Engineers says Katrina was just too strong.