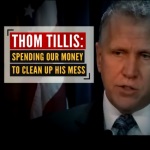 A TV ad from GOP Senate candidate Thom Tillis says that a recent attack ad about him from the Senate Majority PAC is “false.” We don’t think so.

Republican Rep. Mark Kirk is attacking his Democratic opponent in the Illinois race for the U.S. Senate with two ads that go beyond what the facts support. The ads make unsupported claims about the role Giannoulias played at his family’s troubled bank and strain  to tie him to BP, among other dubious statements.
Kirk released the new ads less than a day after he apologized for embellishing his own military record.
Bank Shot
According to one of the ads,

In Episode 5 of our podcast, we look into Republican claims that the new health care law will require the IRS to hire 16,500 agents — and GOP Rep. Ron Paul’s assertion that they’d all be carrying guns. We also discuss health care ads from liberals and conservatives, and claims about the federal student loan program.
(Click the play button below to listen to the podcast. Or subscribe to the podcast on iTunes.)

Sarah Palin made a splash over the weekend as the keynote speaker at the first National Tea Party convention, and she followed up with an interview on Fox News Sunday. But she didn’t always stick to the facts. Palin implied that the Nigerian would-be Christmas Day bomber stopped talking after he was read his Miranda rights. He did, but …

That’s ‘Former Lobbyist’ to you

The Obama campaign has been pushing a connection between John McCain and lobbyists — as in saying that McCain has them working on his campaign. This ad, for instance, claims that “John McCain’s chief adviser lobbies for oil companies” and his “campaign manager lobbies for corporations outsourcing American jobs.” But neither of those campaign staffers are currently lobbyists – a McCain campaign conflict-of-interest policy doesn’t allow it.

Summary
An Obama ad in Georgia ties McCain to former Christian Coalition executive Ralph Reed and the Abramoff lobbying scandal. It doesn’t give a full picture.

The ad says that Reed "is now raising money for McCain’s campaign." But McCain has said, "I neither seek nor want his support."
It says McCain, as a committee chairman, "never even called Reed to testify" about Abramoff, which is true. But McCain’s public report embarrassed Reed and damaged him politically nonetheless.

Summary
An Obama ad features video of McCain walking toward the camera with a group of people in power suits, as the narrator says, "the lobbyists, running his low road campaign." None of the people pictured are lobbyists, however.
The ad also repeats a misleading claim that McCain favors "billions in tax breaks for big oil and drug companies." But McCain’s tax policy doesn’t target those industries. He calls for lowering the corporate tax rate for all companies.

Sen. Barack Obama of Illinois, explaining his call to show compassion for Palestinians, put a spin on the remark that differs from the way it was originally reported by an Iowa newspaper.
Sen. Hillary Rodham Clinton of New York said the Virginia Tech killer had been ruled a threat "to others" and involuntarily committed because of his mental state. Neither is true.

Fibs and Flubs at Democratic Debate

Straining the facts at Iowa’s debate on Sunday Jan. 4.