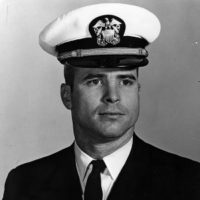 Q: Did John McCain “hide the fact that he ‘accidentally’ killed 134 American sailors”?

A: No. He wasn’t responsible for the fatal 1967 accident aboard the USS Forrestal.

The four remaining candidates debated once again, this time in Tampa, Florida — where facts took a beating.
Mitt Romney falsely claimed the Navy is smaller now than at any time since the start of World War I. (It had fewer ships as recently as four years ago.) And Newt Gingrich again claimed credit for balancing federal budgets that were voted on after he left the House.
The event was sponsored in part by NBC News,