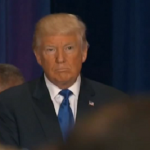 With the presidential election just a few days away, we offer a sampling of the misleading claims made by Donald Trump during speeches this week.

Defense Secretary Chuck Hagel blames Congress — and absolves President Obama — for the automatic budget cuts known as the sequester. But Obama supported and signed the bill that triggered the cuts.

President Barack Obama and House Speaker John Boehner emerged from their White House meeting on sequestration blaming each other for the automatic spending cuts and misrepresenting the other side’s position:

Obama’s remarks left the false impression that Boehner has reneged on a GOP plan to raise $800 billion by limiting tax breaks for the wealthy. Boehner offered that plan in December as an alternative to raising income tax rates. But that plan was dropped when Obama and Republicans agreed to raise rates,

House Speaker John Boehner claimed the federal government will take in more revenue this year than any other year in history. That’s true in nominal dollars, but not as a percentage of gross domestic product — a measure preferred by most economists that accounts for growth in population, inflation and earnings.
In fact, as a percentage of GDP, revenues this year are actually lower than the historical average since World War II.
In an interview on CBS Evening News on Feb.

This Republican talking point aims to blame President Obama for more than $1 trillion in automatic, across-the-board cuts in domestic and defense spending that — without action by Congress — are scheduled to take effect on March 1. But the reality is that the pending cuts would not be possible had both Democrats and Republicans not supported the legislation that included them. …