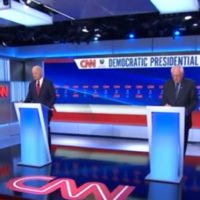 While debating 6 feet apart due to the coronavirus outbreak, the two leading contenders offered competing versions of the facts on several key issues.

OK, we get the joke. But there’s a problem with the satirical TV spot that the Stephen Colbert “super PAC” is running against Mitt Romney in South Carolina. Romney didn’t bump off the companies that the ad jokingly claims he did.