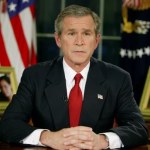 No WMDs in Iraq

Q: Were there really weapons of mass destruction in Iraq when the U.S. invaded in 2003?
A: No. The Iraq Survey Group determined that Iraq had abandoned its quest to develop chemical, biological and nuclear weapons and that it had already destroyed all of its existing stockpiles of chemical and biological weapons.

U.S. Intelligence on WMDs in Iraq

Q: What was known to U.S. intelligence and Congress about WMDs in Iraq before the vote to go to war?
A: Senior U.S. intelligence officials believed, incorrectly, that Iraq had stockpiles of chemical and germ weapons and was developing nuclear weapons. They also agreed Saddam Hussein wouldn’t give such weapons to terrorists unless attacked. Few members of Congress read the full 92-page report with all its qualifications and dissents.