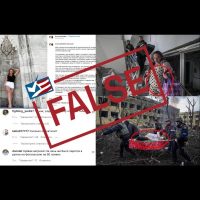 Russian planes bombed a hospital in Mariupol, Ukraine, on March 9, killing three people and injuring at least 17, including two pregnant women seen in photos shared around the world. Social media posts falsely claimed one woman “posed” as the two women. One of the women died of her injuries, along with her baby; the other gave birth to a daughter.