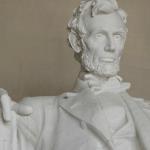 John Kasich said, “I think old honest Abe went into the convention either third or fourth and came out the winner.” No. Abraham Lincoln started with the second most delegates at the 1860 Republican convention.

A Historian’s Perspective on Gingrich & Lincoln

Newt Gingrich wrongly claimed the Dred Scott decision “ruled that slavery extended to the whole country.” It did not. The ruling stated that Congress had no authority to ban slavery in new territories, but it stopped short of applying the ruling to all states. Gingrich also claimed that President Lincoln “explicitly instructed his administration to not enforce Dred Scott.” But the research historian at the Lincoln presidential library knows of no such directive or any reason to issue one.

Jon Huntsman wrongly paraphrased Abraham Lincoln as saying: "[W]e are a great country because we are a good country." Lincoln assuredly never said that.
The expression is similar to a common political bromide that Ronald Reagan and others have attributed to Alexis de Tocqueville. But de Tocqueville didn't write those words, either.
Former Utah Gov. Huntsman made the slip-up at the announcement of his presidential candidacy in Liberty Park, N.J.

Huntsman, June 21: Our political debates today are corrosive and not reflective of the belief that Abe Lincoln espoused back in his day,