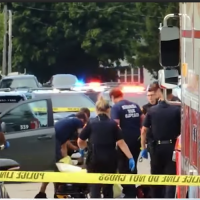 Posts on social media falsely claim that the man shot by police in Kenosha, Wisconsin, “wouldn’t have been shot if he was still in prison for raping the 14 year old.” There’s no evidence he was ever charged with such a crime — let alone convicted and imprisoned. Jacob Blake was charged in July with sexually assaulting an adult woman, but has not been convicted.