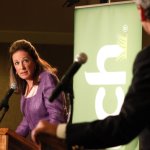 In a spirited debate between South Carolina congressional candidates Elizabeth Colbert Busch and Mark Sanford, we found a couple of misleading statements — and one seemingly contradictory exchange about Sanford’s voting record that isn’t.

John Kuhn, one of 16 Republicans seeking his party’s nomination in South Carolina’s special House election, falsely claims former Gov. Mark Sanford “supported a massive earmark spending bill.” Sanford in fact vetoed the bill, saying it was packed with “politically-driven, pork barrel spending,” including some at Kuhn’s request.
The ad also says Kuhn “opposed that bill and fought to stop wasteful spending.” But that claim only goes so far. It’s true that Kuhn filibustered the bill in 2003,

On Friday, the Democratic National Committee released an ad attacking Gov. Mark Sanford of South Carolina for not accepting $700 million in stimulus funds. Sanford is considered a potential Republican candidate for president in 2012.

The ad is correct to say that Sanford is "turning down millions in recovery act funds." Sanford has said that he would rather use the money available at his discretion through ARRA to pay down the state’s debt, and he requested a special waiver from the White House to do so.