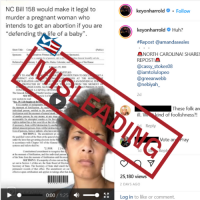 A bill introduced in the North Carolina House of Representatives last year said anyone getting an abortion should be “held accountable” for murder. The bill received little support and did not advance. But social media posts misleadingly claimed the state is considering a proposal that would “make it legal to murder a pregnant woman” trying to get an abortion.