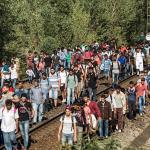 Donald Trump took several verbal jabs at Republican New Mexico Gov. Susana Martinez after she declined to attend his rally in Albuquerque. But his criticism of her effort to keep Syrian refugees out of New Mexico was way off base.

A ‘Scandal’ in New Mexico?

In New Mexico’s governor’s race, Republican Susana Martinez accuses Democratic Lt. Gov. Diane Denish of giving a $500 million "special tax deal" to a developer who contributed to her campaign and hired her husband as a lobbyist. But Martinez, a district attorney, uses circumstantial evidence to make her case in an ad that falsely accuses Denish of "hiding a scandal."
The evidence cited by the Martinez campaign fails to prove that Denish misused her office to help the developer get a tax break or that the tax break was connected to her husband’s lobbying job or her campaign contributions.

Republican Susana Martinez bashes her opponent, Democrat Diane Denish, over unemployment, the state jet and a Christmas card in her latest ad in New Mexico’s gubernatorial campaign. While some of the accusations contain grains of truth, the ad presents little evidence to back up its broad charge that Denish, who is currently the state’s lieutenant governor, and retiring Gov. Bill Richardson "wasted millions."

The spot, which began airing July 22, opens with a shot of Richardson and Denish,

In episode 17 of FactCheck Radio, we look at false and misleading oil spill claims from both Republicans and Democrats. Also, we talk about the New Mexico gubernatorial race and debunk an ad from Democrat Diane Denish, attacking Republican Susana Martinez.
(Click the play button below to listen to the podcast. Or subscribe to the podcast on iTunes.)

For more on the stories discussed in this episode, see:
Oil Spill, Foreign Help and the Jones Act

The November election is several months away, but the mudslinging is in full swing in the New Mexico governor’s race. Republican Susana Martinez and Democrat Diane Denish both have launched ads that try to link the other to convicted or accused sex offenders. Martinez’s ad holds Denish …

An ad claims that her conviction rate in murder cases is "the worst in New Mexico," and the Denish campaign says that rate is 60 percent. But the Denish camp simply used the wrong statistics and came up with invalid figures. In fact, figures from an official state agency show Martinez won nearly 96 percent of her murder cases.

In episode 13 of FactCheck Radio, we look at a Republican ad that was condemned by the head of the GOP in New Mexico. Plus, we debunk labor union ads attacking Democratic Sen. Blanche Lincoln of Arkansas, and we update listeners on claims about Muslims and the health care law.
(Click the play button below to listen to the podcast. Or subscribe to the podcast on iTunes.)

We can’t recall a time when a candidate’s ad was denounced as misleading and dishonest by the head of his own party. But that’s what has happened in New Mexico. Harvey E. Yates Jr., New Mexico’s Republican state party chairman, stepped in to referee a dispute between the gubernatorial campaigns of …