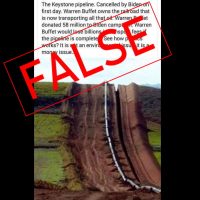 Social media pages are spreading a false claim that President Joe Biden revoked the permit for the Keystone XL Pipeline because of a campaign donation from Warren Buffett. Buffett did not donate to Biden’s campaign. 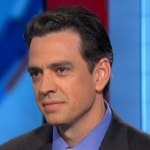 A week ago, billionaire investor Warren Buffett denied he wants to “scrap” Obamacare, calling such reports “totally false.” But that has done little to stop some Republicans from spreading the rumor.

Obama and the ‘Buffett Rule’

In their zeal to pass the “Buffett Rule,” President Obama and Vice President Biden leave the false impression that many, if not most, millionaires (people who earn $1 million or more a year) are paying a lower tax rate than the middle class. The fact is that even without the Buffett Rule “more than 99 percent of millionaires will pay” a higher tax rate than those in the very middle of the income range in fiscal year 2015,

A liberal group’s TV spot features a working mother who says she’s like “Warren Buffett’s secretary” and pays higher tax rates than “many billionaires and millionaires.” Not quite. With her $40,000 income and three kids, she’d actually pay a far lower rate than Buffett says he paid on his income. So, she’s not like his secretary. Furthermore, her rate would also be lower than the rate paid by the vast majority of those making more than $1 million a year.

Rep. Kendrick Meek of Florida is out with an ad that rewords an earlier attack on his Senate Democratic primary opponent, Jeff Greene. We had called Meek’s previous ad false for saying Warren Buffett personally criticized Greene. But Meek tweaked the claim in a new ad, and this time he gets pretty close to the truth.

In a Senate race chock full of attack ads, the Florida Democratic primary pits Rep. Kendrick Meek against billionaire investor Jeff Greene. Both men carry heavy political baggage; Meek did favors for a developer who is now under indictment, and Greene …