A super PAC dedicated to winning a Republican majority in the House of Representatives. 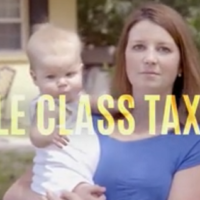 The GOP tax plan is fodder for campaign ads from both sides in Pennsylvania’s special House election and races across the country.

A 501(c)(4) founded by a former Republican senator and a longtime GOP fundraiser. It focuses on keeping the House in Republican control.

The Republican primary for Sen. Richard Lugar’s seat is apparently too close for comfort. Both Lugar’s campaign and the American Action Network are airing misleading attack ads against Indiana Treasurer Richard Mourdock, the senator’s challenger for the nomination. The ads strain the facts to make Mourdock look like a tax cheat who makes bad investments and does not show up for work.

The AAN ad claims that “Hoosier pensions and other funds lost millions” because of Mourdock’s “big bet on junk bonds.”

Newspaper ads from a conservative group make the disputed claim that "Obama's Medicare Plan Will Increase Medicare Premiums." The "plan" it refers to is actually designed to produce lower prices for low-income Medicare Part D beneficiaries and taxpayers. And whether drug companies would increase prices to others in response is a matter of conjecture, not fact. Experts have differing views. And the sponsor of the ad — whose sister organization produced a study supporting the claim —

As the election draws near, some conservative groups are making ever-wilder claims about the new health care law: An elderly man in a Crossroads GPS ad makes the death-panel-esque claim that the law “threatens our lives.” The 60 Plus Association …