A Botched Attack on IRS Budget 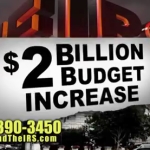 An ad calling for the abolishment of the IRS incorrectly claimed that the federal agency’s budget increased by $2 billion. In fact, it’s down by nearly $1 billion during President Barack Obama’s first term.

Summary
In our recent article on the second GOP debate, we called out Gov. Mike Huckabee as well as Reps. Tom Tancredo and Duncan Hunter for their support of the FairTax. We wrote that the bipartisan Advisory Panel on Tax Reform had “calculated that a sales tax would have to be set at 34 percent of retail sales prices to bring in the same revenue as the taxes it would replace, meaning that an automobile with a retail price of $10,000 would cost $13,400 including the new sales tax.”