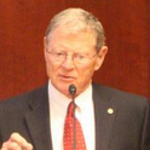 Sen. Jim Inhofe scoffed at the suggestion that China could shift 20 percent of its energy to non-fossil fuels by 2030, in part, he said, because China “has no known reserves of natural gas.” But Inhofe is wrong about that.

Q: Is General Motors becoming ‘China Motors’ using taxpayer dollars?
A: No. The restructured GM is still based in Detroit and is still one-third owned by the U.S. government. But it sells nearly as many cars in China as in the U.S. and has continued expanding operations there.

Summary
A pro-Romney group is savaging Newt Gingrich with TV ads and mailers to Iowa Republicans. Gingrich dismisses the attacks as “lies.” We find that some of the claims from Restore Our Future are indeed distorted, false or misleading. But several are also right on target.

A TV spot makes a distorted claim that Gingrich co-sponsored a bill containing money for a United Nations program “supporting China’s brutal one-child policy.” The truth is that bill specifically prohibited the use of funds for “involuntary sterilization or abortion,” or “the coercion of any person to accept family planning services.” The funding in question was a small part of a much larger bill which died before ever coming up for a vote.

Joe Biden mistakenly claimed Americans own 85 percent of U.S. Treasury securities during his visit to China. Americans own 54 percent of the U.S. public debt — that is, the amount of debt held by the public. They own 69 percent of the total debt, which includes money the U.S. government owes itself.
At several stops in China, Vice President Biden sought to reassure the Chinese that their investments in U.S. treasuries are safe.

Sen. Dick Durbin incorrectly claimed that the U.S. borrows money "primarily from China" to fund the federal government. China owns about 8 percent of the total U.S. debt.
The Illinois Democrat made the claim during a June 19 interview on NBC's "Meet the Press."

Durbin, June 19: Keep in mind, for every dollar we spend in Washington, we borrow 40 cents, primarily from China, our major competitor in the world.

Durbin is largely correct that the U.S.

In what could be an early preview of the 2012 campaign, Mitt Romney – a once and perhaps future Republican presidential hopeful – has released a new video on his political action committee’s Web site attacking President Barack Obama on climate change legislation.

Romney says that any cap-and-trade proposal "wouldn’t do a thing" because it would simply move "greenhouse gas emitters from America, to other nations like China and India that don’t participate in our program."

Drilling Off the Coast of Cuba

Q: Are the Chinese drilling off the coast of Cuba?
A: No. George Will and Vice President Cheney got that wrong. But Cuba has allowed for exploration by at least six other non-Chinese firms in the region and onshore testing and exploration by China’s Sinopec.