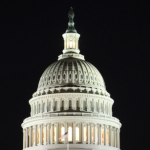 Some Democrats have taken to exaggerating the cost of the federal government shutdown, suggesting that it cost the economy nearly 1 million jobs, and claiming that it cost taxpayers $30 billion. Neither statement is accurate.

After yanking an ad with a false claim off the air in North Dakota, Crossroads GPS is back with an amended version that is technically accurate, but still grossly misleading.
The original ad claimed that Democratic Senate candidate Heidi Heitkamp “spent taxpayer dollars on private planes” while she was the state’s attorney general. That wasn’t true. The planes were donated by the federal government.
The amended version, which started running Aug. 10, says she “allowed staff to fly a taxpayer-funded plane.”