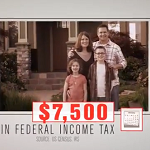 In an ad attacking a Republican senator, the League of Conservation Voters claims the average Wisconsin family pays $7,500 a year in federal income tax. Not so. The tax would be $724 for the family shown in the ad with the income specified by the league. 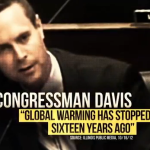 The League of Conservation Voters misuses a quote by a Republican congressman to portray him as “extreme” on climate change.

The November elections are still nearly a year away, but the TV air wars over Senate seats have officially begun in earnest. The balance of power is up for grabs, and outside groups are pouring millions into ads attacking candidates in key Senate races. The biggest plays have come from Crossroads GPS …

From time to time, we find that our work is cited by politicians or political groups. Last week, the League of Conservation Voters ran an ad in Virginia referencing our articles on the cap-and-trade energy bill:

The LCV ad says that Republicans are attacking Democratic Rep. Tom Perriello of Virginia for "supporting a new clean energy jobs plan," but that we said the "Republican ad was wrong" and figures used by Republican Whip Eric Cantor were a "misrepresentation."